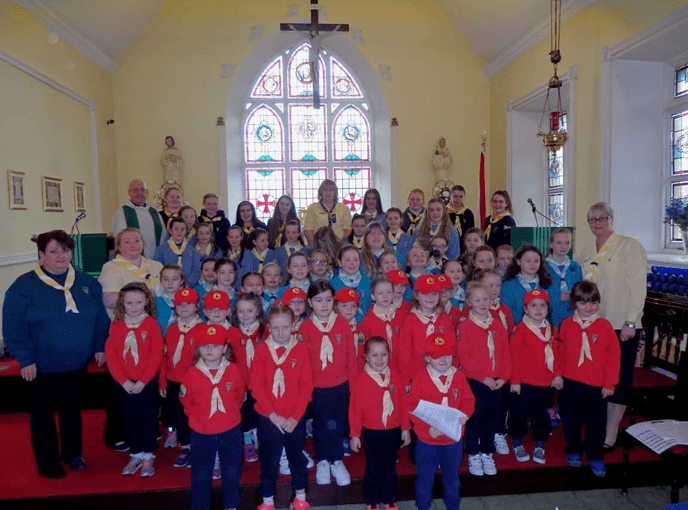 A new girl guides unit held their very first enrolment ceremony in St Joseph’s Church in Rathnew this past weekend.

The Catholic Guides of Ireland (CGI) was in attendance to welcome the newest members to their organisation, with over 60 girls between the ages of five and 17 years getting enrolled into the association.

In a statement, the CGI said: “It’s been almost 40 years since there was a girl guide unit in Rathnew and this new group have certainly brought the Guiding spirit back with a bang, it’s great to see such a dynamic new group for girls thriving in the village”

Buion Naomh Brid was established in September 2017 has been involved in several initiatives across the county.

The Ranger section for teenagers has attended a national weekend camp in Newgrange; the Cygnet and Brigin sections (for girls aged four to ten) have been on a mystery Christmas trip with another group of guides from Loughlinstown; and most recently the Brigin and Guide sections both sent teams to the Regional Communications Cup, a public speaking competition, where one of their Guides placed third.

The unit also filled shoe boxes for a homeless charity in Dublin at Christmas and filled boxes with donations for Five Loaves, who are based in Bray.

For anyone interested in joining; the group meets on Wednesday evenings in Shamrock Park, Rathnew Soccer Clubhouse, and can be contacted through their Facebook page.