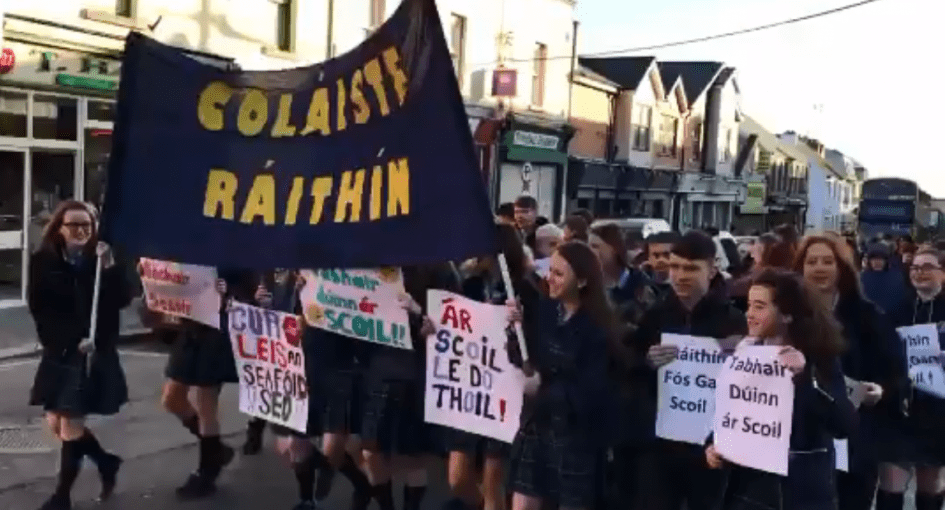 Students of Colaiste Raithín marched in February in protest of the uncertainty of their new school building.

A petition has started online to open the new Coláiste Ráithín school which has been delayed since the collapse of the construction company involved last month.

The school was due to open on the grounds of the Old Bray Golf Club in September of last year, before the date was postponed.

The school building has been left in uncertainty after building company Carrilion—who were building the school on behalf of the Government—went into liquidation in January.

Déirdre Crowe, Chairperson of the Board of Management of Bray School Project, said: “The situation for students and teachers in the current building is rapidly becoming untenable.

“An entire extra class of first year students were enrolled in September, which has led to overcrowding in a building which is already dilapidated.

“Three new subjects and two new teachers started in September last but they have no facilities to teach these subjects – PE, Home Economics and Technology.”

Last week, students from Cólaiste Ráithín marched on the streets of Bray in protest of the continued uncertainty over their new premises.

The petition currently has over 2,000 signatures, while Coláiste Ráithín are hoping to get 2,500 signatures so they can then forward it to Minister for Education Richard Bruton.