For the second time in a week sheep have been killed in dog attacks in County Wicklow.

5 sheep were killed in two separate attacks at the farm of PJ O’Dea on Thursday night and Friday morning in Rathdrum.

The farmer told Wicklownews.net “Just before 11pm on Thursday night two friends of mine spotted two dogs in the field and gave chase but the damage had been done, I then stayed in the field to see if they would come back. I went into the house for a short time around 2.30am and when I went back out the dogs were in the field again, unfortunately I did not get to catch them.

“In total 5 sheep died and a further 10 were injured, since the attack two pregnant ewes have lost a set of twins and triplets and more may abort.

“It has thrown my whole operation into chaos as I can not longer put the sheep out into the fields until these dogs are caught.”

“I am pleading with dog owners to be aware where your dog is at all times.”

The dogs were described as a dark Lurcher and a black Labrador. 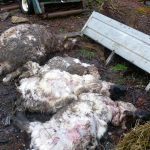 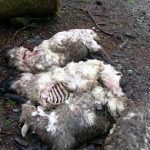 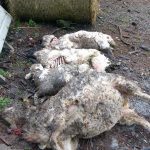