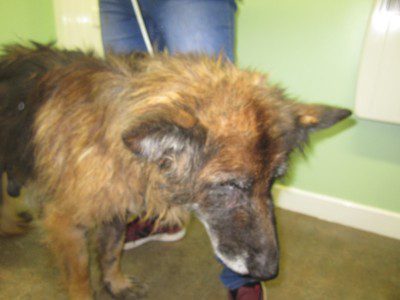 449
SHARES
ShareTweetSubscribe to our Newsletter

Patricia Tyrrell with an address in Arklow pleaded guilty to the charges under sections 11, 12 and 13 of the Animal Health and Welfare Act 2013 at Arklow District Court on 14th February 2018.

In addition, Judge David Kennedy fined the accused €1,000 and she also paid €881.20 to cover ISPCA expenses.

ISPCA Chief Inspector Conor Dowling described to the district court how he arrived to her home on Tuesday 27th September 2016 and discovered a male German Shepherd that was underweight with its bones protruding.

The dog was also suffering from a serious skin condition over much of its body and its ears were infected and discharging. 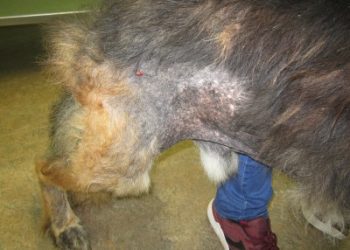 Chief Inspector Dowling said: “The dog was obviously in distress, shaking its head and attempting to scratch continually”.

Mr Dowling detailed how the dog was removed to a veterinary surgeon and treated for a number of days. However, later x-rays revealed chronic hip problems and the dog was euthanised based on veterinary advice.

In response to a question from Judge Kennedy on how long it would have taken for the dog to deteriorate to this condition, the Chief Inspector replied that the evidence suggested that the skin condition had been developing for over two years.

When the accused took the stand and expressed her shame at allowing her dog’s condition to get to such a state, Judge Kennedy asked: “Why didn’t you bring him to a vet?”

On sentencing, Judge Kennedy said that the dog had endured “horrendous suffering which could have been easily avoided”

Inspector Dowling said: “It is hard to imagine the torment that this dog must have experienced continually over a prolonged period of time.

“While today’s outcome cannot undo his suffering, it will hopefully send out a message as to the potential consequences if pet owners fail to adequately deal with any health issues that may affect their animals.”

WARNING: VIDEO CONTENT IS GRAPHIC AND MAY CAUSE UPSET 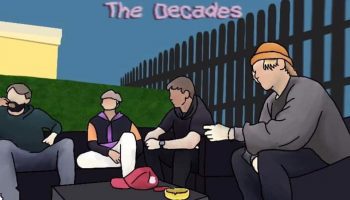