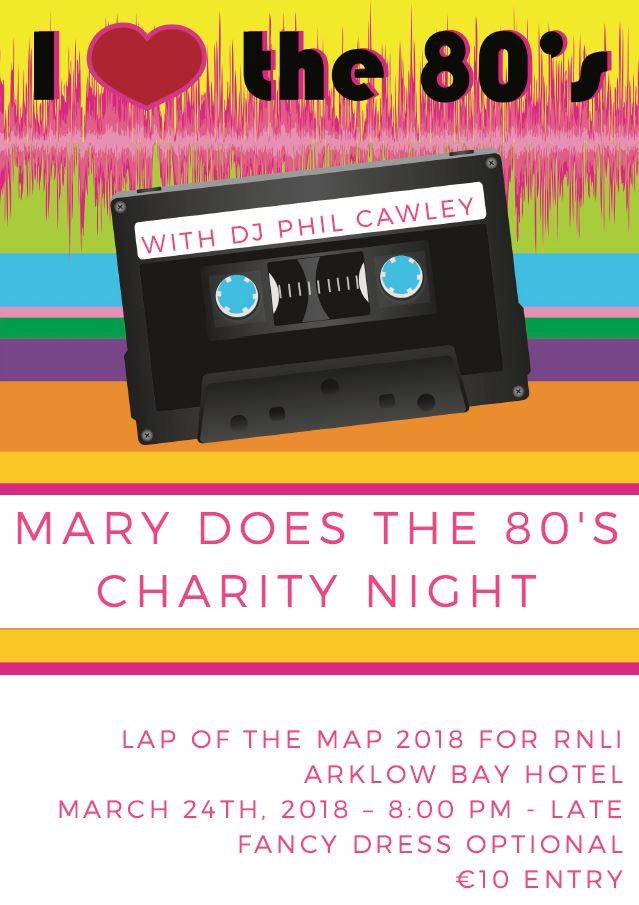 Remember that cracking 80’s tune, “Oh I wanna dance with somebody!”?  Well, now’s your chance!

I love the 80’s Disco, Mary Does the 80’s Charity Night, with Today FM DJ, Phil Cawley, is hitting the Arklow Bay Hotel on Saturday, March 24th.  Not alone are you guaranteed a night of re-living your dodgy disco moves, but you also get a “Once in a Lifetime” opportunity to help Arklow’s very own wonder woman, Mary Nolan Hickey.

As many of you will know, Mary, at the age of 65, set out from Arklow on New Year’s Day to run a lap of the map for the RNLI.   Her aim is to run the coastal route around the entire island of Ireland, raising as much funds as she can for the RNLI, and the brave men and women who answer the call, day or night, good weather or bad.

Mary, is no stranger to endurance running.  She took part in the toughest foot race on earth, Marathon des Sables in the Sahara Desert, which saw her run six marathons over seven days.  She’s the only woman to have run in each and every Dublin Marathon since it’s inception in 1980, she’s also taken part in a 24 hour race in the Swiss Alps and just to change it up, she dipped into coastal rowing in recent years, and was part of the Arklow team that rowed from Arklow to Wales in the Celtic Challenge.

This, however, is undoubtedly her toughest challenge yet.  While Mary has a support team beavering away in the background, organising accommodation, food, sports physio sessions etc; she is out on the road on her own, battling the elements and putting in the miles.  So far Mary has covered over 1,100 miles – which is the equivalent of 42 marathons.

Throughout her journey around Ireland Mary has been blown away by people’s generosity and support.  From the women and men who turn out to run a few miles with her; to the kids in local national schools, who excitedly follow her live tracker and line out in small towns and villages to cheer her on and high five her on the way through.  There was one day in Louisburgh, in County Galway, when Mary was running a quiet country road when she spied a little table in the distance with a drink and a sandwich left out for her and a small, young girl eagerly awaiting her arrival to cheer her on.   It’s these kind of experiences which has seen Mary describe her adventure as ‘truly uplifting’.

Yes, there have been very tough days.  She had to contend with Storm Eleanor on her way from Greystones to Howth.  Storm Emma and the beast from the east put a halt to her journey as Mary had to come off the road during the recent red weather warning.  Mary’s also nursing a slight niggle, and while that has slowed her down to walking some days, it certainly hasn’t dampened her enthusiasm .  If anything, it’s made her even more determined to push on.

Next Friday night gives you the chance to help Mary in her cause.  So, dig out those leg warmers, grab some friends and head over to the Arklow Bay Hotel.  The music will be brilliant, you’ll dance your heart out, have a laugh and help a true Wicklow legend.

The I love 80’s Disco, Mary Does the80’s Charity Night, takes place at the Arklow Bay Hotel on Saturday, March 24th at 8pm.  Tickets are €10 on the door. Fancy dress optional!