Wicklow’s Past: The Princess of Castletimon 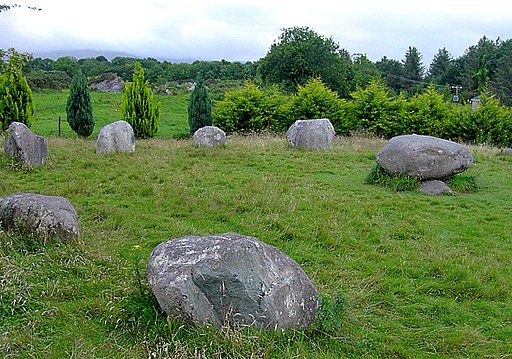 Wicklow’s Past is an ongoing series by Stan O’ Reilly of Wicklow’s Historical Society.

In the 1930s there were many ancient artifacts in private ownership and they went on display at a craft fair in Wicklow Town. These items included a bronze vessel used as a lamp thousands of years ago, flint, a flint spear and arrow head, two flint scrapers or knives, burial urns, bog butter and horn tumblers. Where are these now?

Pre-Christian people were living in west Wicklow which held the largest population and down the east coast from Bray to Arklow there were scattered communities. The land may have been wet and marshy, filled with bush and forests, but there was abundant wildlife and fish to be hunted.

On the east coast there were communities in the areas of Bray, Enniskerry, Delgany, Newcastle, Rathnew, Wicklow, Brittas Bay, Innisbaoithin, Ennoreilly and Arklow. During the Bronze Age, over a thousand years before Christianity, the area of west Wicklow was inhabited and the evidence of this has been found in the graves, stone circles, weapons, jewellery, burials and rock art found there. A fine example of a stone circle may be found near Hollywood, commonly called ‘the Piper’s Stones.’

Men were turned to stone

Folklore states that the stones were once living breathing men, turned to stone as a punishment for taking part in an illegal dance, frozen in place and doomed for eternity to watch the world go by. The stones also had a connection to  astronomical observances in the past and actually had a role as a calendar which fixed the dates of seasonal change and decided on the dates for sowing crops.

The people were very well educated, knowledgeable and had a top level of civilisation. They built huge fortifications in the south west of Wicklow at a later date. The circular stone fort at Dunbolg, ‘the Ring of the Rath,’ is well worth a visit and was the site of the battle of Dunbolg which resulted in the relicts and remains of Saint Solonius (Solon,) and Sylvester being moved to the site of St. Baoitin’s Church at Innisbaoithin on the east coast.

The two men were followers of St. Palladius who arrived at Wicklow in the year 431, staying there for a year. The men were not well received by the pre-Christian Chief Nathi, who had a fortified site on the Church Banks in Wicklow Town.

The location of St. Baoithin’s early Christian church now lies under the sea and at the site of the rocks now known as ‘The Wolves’ situated south of the Wicklow lighthouses. St. Baoithin was an early hermit monk, a man who was born and reared in the area and a holy man who was satisfied with his seclusion and isolation on the island where he built his church and settlement, which was recorded as being of ‘second in importance’ only to that of Glendalough.

Another early Christian site lies a little further south at Ennoreilly, the location of the church of St. Degan, a nephew of St. Kevin. Bishop Degan was originally a local hermit monk before travelling to Rome and to England where he became a Bishop. His church survived until the arrival of the Anglo-Normans, who’s new churches marked the end of Degan’s church.

An Ogham Stone can be found in Castletimon along with the burial site of the Castletimon Princess. She was an important member of her community and had a high status. Her people were known to mount raids by sea and did so from the beach at Brittas Bay.

One day the Princess went to the beach with the members of her community to watch her lover board one of the ships of the raiding party. She had an anxious wait for the return of her lover, lasting months, until the boats were finalled spotted on their way back. When the raiding party arrived back at Brittas Bay, there was no sign of her lover. The other men told her he had fallen in battle, and overwhelmed by gried and shock, she dropped dead.

‘She listened to the dreadful tale,

She questioned not the tidings grim,

Nor uttered cry or moan.

One wild last look she cast around,

Then lifeless sank upon the beach.

She was taken from the beach to Castletimon and there laid to rest with all the rites and rituals of her people. It is said that couples who visit Castletimon to this day can, if they listen intently, hear her moans and grieving, carried through the evening air.

Her remains may lie under the Dolmen there. It has been said in folklore that the Castletimon Ogham Stone, which common belief states is a grave marker, is that honouring her lover.

Yet another piece of folklore states that the Ogham Stone was carried to Brittas by the Viking allies of the Leinstermen, fleeing from the forces of Brian Boru after the battle of Clontarf , and that the Vikings had carved the numbers of their dead kings on it. They were said to have dumped the stone before taking to their boats from Brittas Bay beach. This is a fanciful yet entertaining folklore tale.

Yet another folklore tale tells of the Harbinger of death, the Banshee, in the graveyard at Three Mile Water and that she glides across Brittas Bay beach, as does the doleful sprite of the Castletimon Princess.