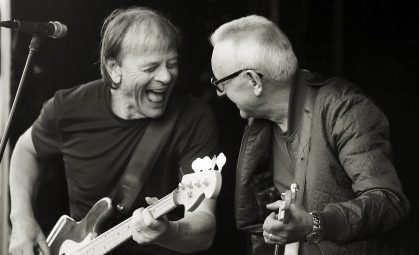 Two of Ireland’s best ever Rock/Blues musicians are recording  and touring Ireland with a 5-piece band in 2018. Don is a prolific singer/ songwriter/ musician with two number ones  ‘Winner in You’  and ‘Inner City’.

Bono  described Don as ‘The Best Harmonica Player in the world’.  Don starred in ‘In the Name of the Father’.

Rob Strong has a sensational voice and once turned down the opportunity to join ‘Deep Purple’, also tours Europe with his son, Andrew Strong, lead singer of ‘The Commitments.

Tickets €18 or €16 concessions. For booking: http://www.mermaidartscentre.ie/events/details/the-don-baker-and-rob-strong-band