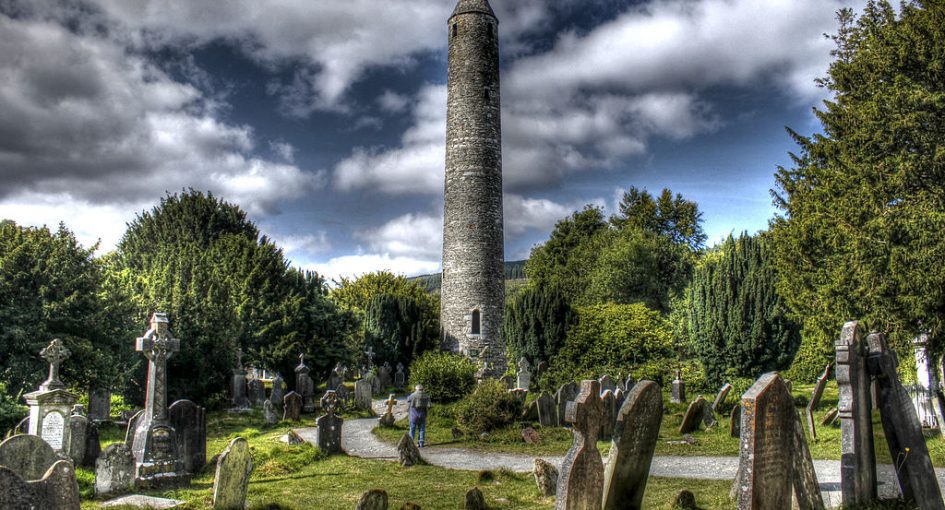 Wicklow’s Past is an ongoing series by Stan J. O’ Reilly of Wicklow’s Historical Society.

Our perception of the early holy men and women who were later to become the early saints and the churches they established needs to be revised for the purposes of this article.

Many of them were local and natives, others arrived from Britain and Wales. These early holy men and women craved isolation and seclusion well away from the temptations of men and women. They knew well that the devil stalked them and they found their favourite places and locations in the woods and mountains of what would later become Co. Wicklow.

They were a determined hard breed of people who lived off the land, fishing and hunting with their dogs. They wore animal skins and used their isolation for fasting and prayer. They could not hide forever and word would soon spread that a holy man was in the area. People would then flock to them for blessings and to become followers.

At first they lived in caves and constructed hides; for St. Kevin, the hollow of a tree suited his needs for a time. They were more Grizzly Adams than Padre Pio types in their quest for survival and the hermit lifestyle.

Later they built cells or churches when their isolation ended. Many would then leave their followers to these churches and then go in search of isolation once more — Mochorog was one such man. Son of a British King and a Saxon Queen he came to Ireland as a monk in search of St. Kevin. He established churches at Enniskerry and Delgany, St. Kevin to whom he delivered the last rites helped him construct a cell to the east of Glendalough.

Mochorog is also associated with Kilmacurrough, (Cill-mo Cred.) Cred was recorded as being the wife of Finnach, both parents of St. Baithin of Inisbaoithin. Cred was a daughter of Ronan, 11th  Christian King of Leinster, who founded a church at modern day Kilmacurragh. The area is deemed a holy location and a place of isolation, which is probably what drew Mochorog there.

The churches established by the early saints were not large buildings and usually only housed the priest, a few of the older amongst the locals and perhaps a disabled local or two. The congregation who gathered at these small churches stayed outside. One such church Teach na Cille or house of the church gives the origin to the place name of Tinakilly.

The early churches were small and varied in size, such as 42ft x 20ft or 50ft x 40ft.  Mochorog’s brother, Canoc, was also one of the early saints. Mochorog is credited with St. Berach and St. Kevin with founding the monastic city of Glendalough and turning it into a centre of learning.

Other early churches include KIlmartin, the saint that was said to be a holy man from Wales. St. Credan was said to have established a church at the location named after him, Macreddan. He was a disciple of St. Petroc and was known to St. Degan who had established his church at Ennorilly.

St. Cathach’s Church was founded at Kilcarra. Tegan, later St. Tegan, was instructed by St. Patrick to found a church at the location now named after him, Kiltegan. St. Ernene founded his churches at Portmarnock, ( the ‘marnock’ segment in the place name Portmarnock is called after him – ‘mo Ernoc,’ one of the many variations of his name.) He is also associated with Kiladreenan in Newtown.

He spent time in isolation at Newrath and Glenealy. An ancient church also stood at Kilfey at the entrance to the Devil’s Glen. St. Mhantain established his church at Wicklow Town, which was second in importance to that of St. Molibbo or Molibba’s church which is situated in the middle of the graveyard on Church Hill in Wicklow Town.

Many Welsh monks made the straight crossing from Wales to the Wicklow coastline. St. Molig built a church at Kilmanin, close to Powerscourt. St. Finnian founded a religious settlement at Aghowle. At Ballykine is an ancient church and cemetery possibly founded by St. Caemhan, brother to St. Kevin. Much of what we know of these early saints and the locations of their churches were recorded hundreds of years after their deaths.

Much of the folklore surrounding these early men and women dates from after their deaths or were recorded by pilgrims of the time and carried across Europe. These are but a few of the large number of the early churches established in the county with female church sites, with dedications to local saints, to the east of Bray and the Penal Church at Wicklow town.