Fire in Glenmalure could have been disastrous for Wicklow uplands

Glenmalure was the scene of a large forest fire on Saturday as a blaze broke out in the woodland surrounding Dwyer’s Chair. Local fire crews were quick to the scene and got the blaze under control before it could begin to spread.

Local councillor Pat Kennedy has called for people to be more vigilant around forests and to be careful when lighting campfires, matches and cigarettes. “A very dangerous situation could have developed here in the valley on Saturday” Cllr Kennedy said. “We were very lucky that locals were vigilant and quickly contacted the relevant authorities and local fire crews.

I want to commend them as they were very quick to the scene and, on difficult terrain, were quick to get the fire under control. We were also very lucky that there were no strong winds on Saturday to spread the blaze.

People need to be more careful when lighting fires and cigarettes around the woodland areas.

Under different conditions this fire could have spread to homes. As it is many people in the Valley were left without water in order for the fire crews to fight the fire.” 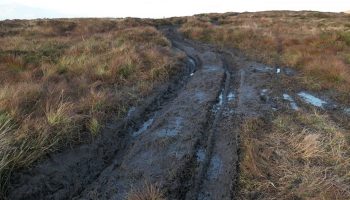 Community reeling after mountain walk is destroyed by quad-bikes

Ecotrail Wicklow and Pure Partner to Clean Up The Uplands