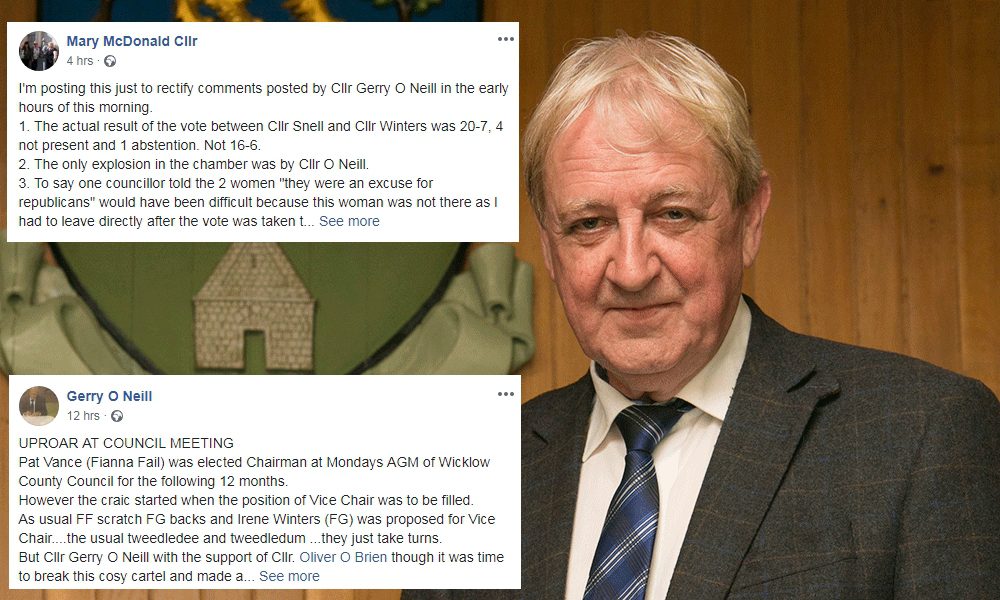 In a Facebook post, Cllr. O’Neill fired shots at Sinn Féin Councillors Mary McDonald and Nicola Lawless over their decision to vote for a Fine Gael member as Vice Chair of the Council:

“The craic started when the position of Vice Chair was to be filled; As usual Fianna Fáil scratch Fine Gael’s backs and Irene Winters (FG) was proposed for Vice Chair….the usual tweedledee and tweedledum …they just take turns.”

O’Neill with the support of Cllr. Oliver O’Brien thought it was time to “break this cosy cartel”, and nominated independent Cllr. John Snell to run for the position against Cllr. Winters.

Cllr. Winters went on to win the vote by a clear margin (20-7), with Snell congratulating her and wishing her the best for her role — but uproar kicked off when Snell remarked “the Fine Gael Official Sinn Féin coalition was starting to sprout” after the two Sinn Féin members voted for a Fine Gael candidate.

“The chamber exploded” after this comment according to O’Neill: “There was shouts of ‘up the republic’ and ‘blueshirts’ while one unnamed Councillor told the two women ‘they were an excuse for republicans’. After the meeting both FF and even FG Councillors expressed dismay at the voting antics of the two ladies.”

“It was fairly stomach churning to see TD John Brady’s Councillors voting for a Fine Gael candidate instead of a TRUE Republican, times are a changing,” O’Neill added.

Cllr. McDonald responded this morning to O’Neill’s claims in a Facebook post of her own, saying “the only explosion in the chamber was by O’Neill”:

“To say one councillor told the two women ‘they were an excuse for republicans’ would have been difficult, because this woman was not there (referring to herself), as I had to leave directly after the vote was taken to fulfil a commitment in Arklow.

“The only comment made to Cllr. Nicola Lawless was from Cllr. John Snell when he referred to her as ‘a noise box’ Is this really the kind of person any woman would want representing them ? I think not.

“This is why we voted for Cllr. Winters; She will always vote independently on what’s in front of her; will always question the officials; is not a yes person just for the sake of it; and to exert actual change and move away from “yes men” to the officials running the county.”

McDonald concluded “If the three Councillors in question (referring to O’Neill, Snell and O’Brien) were serious about effecting change they would have supported nominations from the Sinn Féin group over the last 2 years — but they didn’t.”

The three councillors in question were expelled from Sinn Féin last year in relation to an unresolved row with the party over the process for appointing who would replace John Brady as a councillor, following his election as a TD in 2016.