Wicklow’s Past: Fame and Rivalry of Wicklow’s Saints 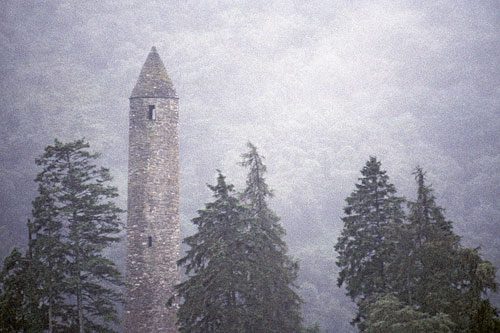 Wicklow’s Past is an ongoing series by Stan J. O’ Reilly of Wicklow’s Historical Society. Read along as Stan takes you through some fantastic tales of history and folklore from Wicklow.

The early holy men and women of Wicklow, who set up their isolated hermitages and founded early churches, achieved very different levels of fame — in particular they reached high levels of fame after their deaths, when they became the early saints of Christianity in Ireland.

Some became famous only in their own local area where they lived out their lives; Others found a more tribal territorial fame, while lesser numbers found fame on a national and international level.

A dedicated rivalry existed within local communities as regards to their local saint; he or she was held in more veneration than a saint in neighbouring territory, and was also more notable in holiness and in special powers. In a sense, there was a ‘our saint is more powerful than yours’ culture and rivalry.

Ancient Wicklow folklore refers to the outstanding supernatural powers attributed to some of Wicklow’s saint, namely Saint Kevin and Saint Brigid. Both of these Saints were said to have possessed the power of resurrection of the dead.

While St. Patrick was in Wicklow, he was said to have carried about acts of unseen power, from creating a flat altar with his bare hand, to carving a cross in stone with his bare hands. But one of the most interesting stories attributed to St. Patrick, was a ‘not-so-saintly’ act he performed in Laragh

While there, St. Patrick supposedly blasted all the oak trees in Laragh to the ground for eternity – all because he was refused a drink by the locals. This can hardly be considered a saintly act, yet many saints punished transgressions in a harsh manner – St. Kevin is said to have turned musical instruments and cheese to stone as punishments.

Don’t let that undermine the many miracles the Wicklow saints did carry out; St. Kevin and St. Berach performed many miracles involving food for the community. Together with St. Mochorog, these three saints are credited with turning Glendalough into a famed learning center.

St. Berach carried a bell with him which had several purposes. At Glendalough while he was there, he carried a bell with him which is said to have served several purposes – most significantly, his bell kept hell’s demons at bay and protected people from harm. The power of the bell was so strong that Berach left it behind him when he moved on to another location, to continue protecting the area. Legend states that as long as the bell remained at Glendalough, the monastic city would be free from harm.

St. Mochorog founded churches at Enniskerry and Delgany which was named after him. St. Kevin helped him build a cell while at Glendalough and he also has ties with Kilacurragh. A church was founded at Kilmacurragh by Cred, the mother of Saint Baoithin of Innisbaoithin, where he founded his own church.

In what became known as the Deanery of Arklow many ancient churches were founded by the early saints incding Cillfinnmagi, Achad Cruachane, Cell Cassaile, Cennturc Celmodicu, Clyriachane, Cellbicsigi and Cell Impodi amongst others. There are other ancient churches in this area whose names are known of, but not their exact locations.

Kilpatrick is home to a holy well with curative powers, dedicated to Saint Patrick. Holy wells abound around ancient church sites and hold cures for everything from skin disorders, headaches, warts and many more illnesses. Each well was dedicated to a local saint, each usually carrying a form of supernatural powers.

Local communities would gather in processions named ‘Pattern Days’, where a ceremony would take place at the well and all would drink from the well while praying and blessing themselves. Offerings would be hung on the branches of a nearby tree with music and dance to follow.

A rebellion in 1798 put an end to many of these gatherings, prohibiting people from gathering in group for pattern days. The gatherings were deemed seditious, suspicious and of rebellious intent. A great fear was stricken in the community by promises of punishments and penalties for people who would participate in these Pattern Day gatherings.

Many innocent gatherings were wrongly reported as Pattern Days to the authorities at the time. Simple gathering such as a dancing school at Kilmacanogue, a group of men leaving a pub in Rathnew Village and even lights left on late at night in Newcastle village, were continually reported, putting fear throughout the community. Such reporting continued up to the 1820s.