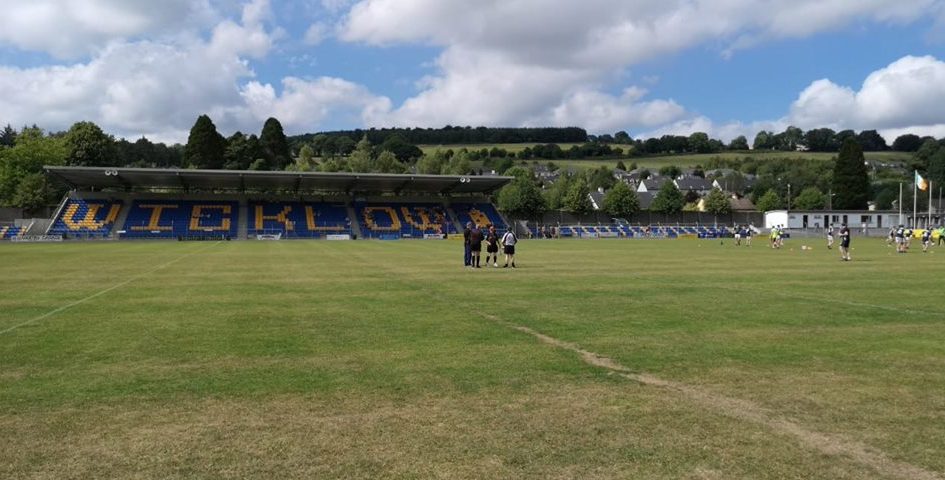 Jacko Dalton scored two goals as Kiltegan made the perfect start to their Wicklow senior football championship group two campaign with a dominant 5-12 to 1-11 win against Bray Emmets on Sunday afternoon.

The two sides were level going into the second half as four points from Niall McGraynor and a goal from Darragh Rochford helped to cancel out two early goals from Seanie Furlong and Dalton.

However, Kiltegan put in a thoroughly ruthless performance in the second half, as goals from Padraig O’Toole, Cathal Fitzgerald, and a controversial second from Jacko Dalton helped Kiltegan brush their opposition aside — despite losing Adam Wynne and Stephen Farrell to black cards.

On a sun-soaked afternoon in Aughrim, it was Bray that came out of the traps more alert, and found themselves 0-2 to no score in front after seven and a half minutes through two frees from Niall McGraynor.

Kiltegan got their first point of the game less than a minute later through Seanie Furlong, who then scored Kiltegan’s first goal of the afternoon from the penalty spot a minute later to take control fo the game for his team.

Kiltegan extended their lead to four after ten minutes through Jacko Dalton’s first goal of the game as Bray Emmets looked under threat of being overwhelmed.

However, Bray showed the resolve to fight themselves back into the game through another McGraynor free. Ronan Byrne restored Kiltegan’s lead before Darragh Rochford bundled home for Bray after Fergal Harmon had made a heroic double save for Kiltegan to prevent the net from bulging.

Byrne’s point would be Kiltegan’s last for 13 minutes as Bray rode the momentum of their goal into the closing stages of the first half. Ben McCormack split the posts following neat build up play involving Dylan Terry and Dara Lohan, before McGraynor notched his fourth point of the first half, this time from open play.

Points from Philip Haughton and Des Kelly followed as Bray looked set to go into half-time with a two point lead. However, Rory Finn got Kiltegan’s first point in 13 minutes in additional time before Ronan Byrne drew the sides level at 2-4 to 1-7.

Surrendering their first half lead seemed to spark something in Kiltegan, as they scored their third goal of the game just 40 seconds into the second half thanks to some quick thinking from Seanie Furlong.

In a game which was already tense due to some inconsistent officiating, tensions boiled over when an incident between Bray’s Darragh Rochford and Kiltegan’s Adam Wynne led to the referee brandishing black cards to both players.

This break in play did nothing to disrupt Kiltegan’s momentum as a point and a goal in quick succession from Cathal Fitzgerald extended their lead to 4-6 to 1-8.

It was a matter of how much Kiltegan would score from that moment on, as Furlong and Fitzgerald both added to their tallies before Farrell was the second Kiltegan man to be black carded with ten minutes left to play.

Bray would get an opportunity to put a shine on the scoreboard, only for Harmon to pull off a magnificent save to deny Des Kelly. This then presented a chance Kiltegan to launch a break-neck counter-attack which ended with Liam Keogh notching his first of the day.

Just under two minutes later and Kiltegan had their fifth goal of the afternoon through Dalton, although it possibly should not been allowed to happen.

A cross-field ball from the perpetually involved Seanie Furlong was competed for in the air by Bray’s Eoin McCormack. McCormack lost the battle and hit the floor clutching his head and neck. Despite the nature of the injury to McCormack, the referee, umpires and linesmen allowed the game to continue and, following some neat work on the edge of the area, the ball was worked to Dalton who got his second goal.

The reaction on the sideline to the goal was one of disgust and outrage on the part of the Bray’s management, and one of remorse on the part of Kiltegan’s, as both sides questioned the judgement of the officials.

The situation was made worse when McCormack — despite being visibly groggy — was allowed to carry on for another three minutes before eventually being withdrawn for Con Benville, with Bray management arguing with the referee as to whether it was a head injury or — as the referee insisted — a neck injury.

The injury, and the circumstances surrounding McCormack’s substitution, threatened to cloud what was an excellent game of football — a trend which Éire Óg and Hollywood would sustain later in the afternoon.