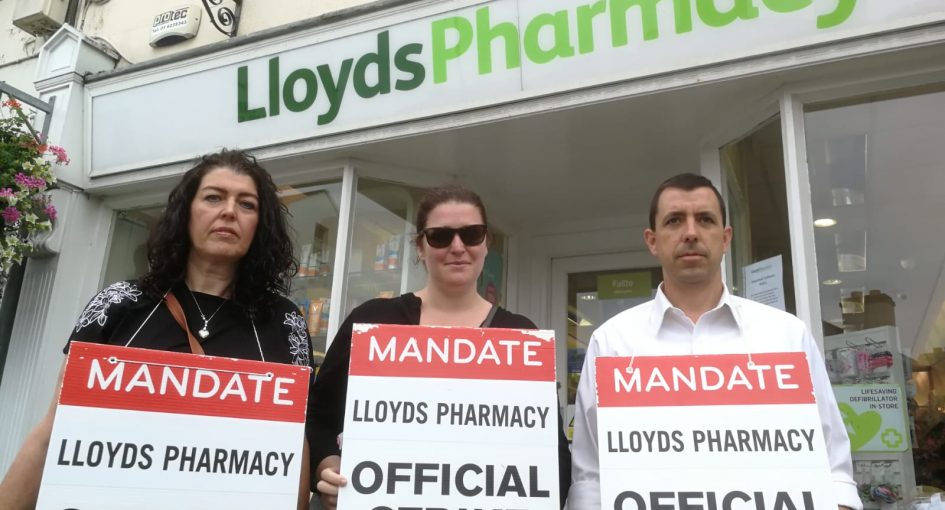 Lloyd's Pharmacy workers from Co Wicklow will join a national picket in Dublin today. This is the seventh instance of strike action by staff in recent months.

195
SHARES
ShareTweetSubscribe to our Newsletter

Staff that are members of the trade union Mandate have picketed at stores across the country — including those in Wicklow Town, Baltinglass and Bray — in the first full day of industrial action as the dispute continues.

Mandate has said that over 240 workers will take part in the picket today, with further industrial action planned for next Thursday (12th July) and Friday (20th July).

Six stores outside of Wicklow have closed today as a result of the strike, with a further eight stores set to close early.

The dispute centres around employee pay and conditions, with Mandate and workers having four main claims, which are:

Workers have been taking industrial action since June 14th.

Lloyd’s Pharmacy have apologised to customers for closures and said they are“working to ensure that all disruption from this industrial action is minimised and patient services maintained”.

The company said today that they would text individual patients with urgent medical needs who they feel need to be advised of their store’s closure.

The pharmacy chain has not addressed today’s strike action did not issue a statement on today’s action, but previously accused the union of misleading the media and said that it did not have zero-hour contracts.

Lloyds also said progress had been made addressing the issues at the heart of the dispute at its employee negotiating body, the Colleague Representative Committee.

The CRC is a “Creature of the company” – Mandate Assistant Gen. Secretary

However Mandate Assistant General Secretary, Gerry Light has described the CRC as a “creature of the company” that allows its workers representation through a management established and company funded committee.

Lloyd’s have said the next phase of CRC engagement is underway: “We have indicated our commitment to speedily delivering further affordable improvements, including on pay scales.”