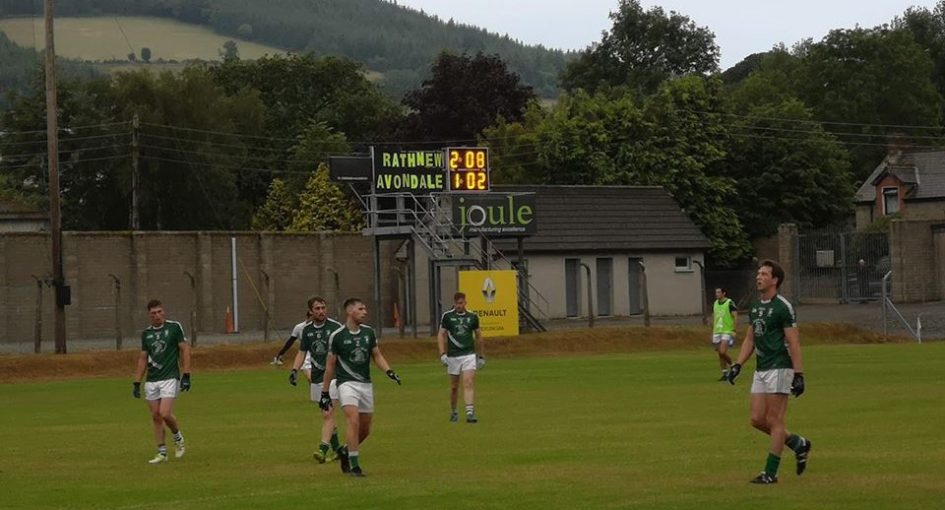 Despite making a bright start, Avondale found themselves behind to Rathnew at half-time.

Rathnew have made a dream start to the defence of their Wicklow Senior Football Championship after they came from behind to brush aside Avondale 5-11 to 2-7.

The Village side scored 5-10 from play as they made an emphatic statement for the rest of the campaign as they look to successfully retain their championship title.

Despite their underdog status, Avondale came flying out of the blocks in the first half with a Ryan Cahill goal coming inside the first two and a half minutes. Rathnew would respond brilliantly, as first-half goals for Leighton Glynn and Nicky Mernagh put the Village men at arms length from Avondale.

The defending champions expanded on their dominant lead in the second half through further goals from Leighton Glynn, Theo Smyth, and Eddie Doyle. Conor McGraynor would smash the ball into the net for Avondale’s second goal but it was a mere consolation as a sorry and wasteful Avondale side were dispatched by ruthless Rathnew side.

The rain that had fallen for much of the late afternoon in Aughrim did nothing to counteract the effects that the recent drought had on the Joule Park turf, as both sides attempted a long ball approach to take advantage of the high bouncing ball. Despite the gloomy weather, Avondale made a very bright start to the game. The ball was well worked up the left-hand side before reaching Ryan Cahill, who calmly stroked the ball past Peter Dignam in the Rathnew goal.

This electric Avondale start would prove to be a mere blip for Rathnew. Jody Merrigan got their first point barely a minute later, before further points from Ross O’Brien, Nicky Mernagh, and two more points from Jody Merrigan put Rathnew into the lead with less than a quarter hour on the clock.

If the Village men were clinical as they turned the game around, the same couldn’t be said for Avondale in their attempts to keep tracks. Following their early goal, Avondale registered four wides and would not score again until Rathnew had already established dominance on the first half.

The reigning champions would take advantage of Avondale’s wasteful finishing when they got their own goal midway through the first half.  A long ball up through midfield was claimed by the excellent James Stafford. He moved the ball onto Leighton Glynn who dispatched the ball into the back of the net to push their lead out to five.

Stafford was involved in the thick of things for Rathnew, and it was his pass that found Nicky Mernagh. Mernagh would strike home to score Rathnew’s second goal of the evening as they went into half-time leading Avondale 2-8 to 1-2.

It didn’t take long for Rathnew to put the game further beyond Avondale in the second half. as Leighton Glynn scored his second goal of the night before the half was a minute old. Avondale would get the next score of the game through Conor McGraynor, only for Mark Doyle to respond to that point with a point of his own.

That score was followed by Theo Smyth and Eddie Doyle, who scored Rathnew’s fourth and fifth goals of the night to extend the Village’s side to 17 points.

Oisin McGraynor and Conor Byrne split the posts as Avondale looked to put a shine on the scoreboard. Graham Merrigan would put the ball over the bar before Saoirse Kearon’s block denied Rathnew their sixth goal. Conor McGraynor would then score two frees before smashing the ball past Peter Dignam for Avondale’s second goal of the game.

Jody Merrigan got the final score of the game before a late brawl threatened to put a dampener on what was a free-flowing game as frustrations started to boil over.

Fortunately, the referee managed to calm proceedings and, following a wide each for both teams, the game was brought to an end.

Following Friday night’s dominant victory, Rathnew will have three weeks to wait for their next game which will come against Kiltegan at Joule Park in Aughrim on the 12th of August.

Meanwhile, Avondale will have less time to recover as they will face Kiltegan in Aughrim on the 5th of August.