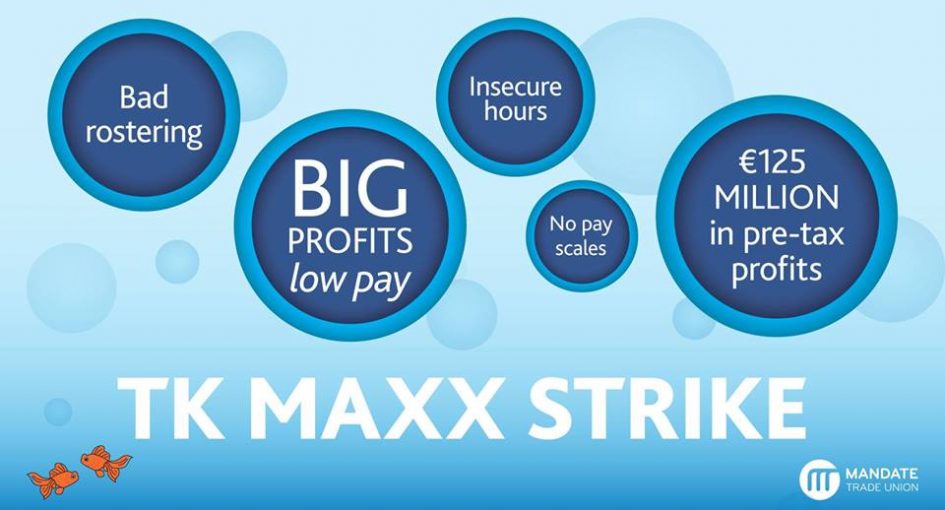 100
SHARES
ShareTweetSubscribe to our Newsletter

The industrial action is in response to the company’s refusal to accept a Labour Court recommendation, according to Mandate.

Mandate stated they took a case to the Labour Court in relation to “banded hour contracts, pay scales and advance notice of rosters”, but TK Maxx informed the court that they would not be attending or heeding the court’s process due to “direct employee engagement processes in place”.

The Labour Court issued a recommendation in February stating: “The Court recommends that the Employer should recognise the Union as the representative of those employees who are in membership of the Union and should engage with it in dealing with employment related matters.”

Mandate say the refusal of the company to allow their workers representation has “left them with no alternative but to strike.”

Mandate Trade Union’s Divisional Organiser for Wicklow Michael Meegan said: “Once again we have a highly profitable and very successful multinational retailer refusing to engage with their workers through their representatives and ignoring the State’s industrial relations processes. This is regrettable and very frustrating for our members who have very reasonable demands.”

Mr Meegan continued: “TK Maxx workers are low paid, they have insecure working arrangements and their rostering is very unreliable. We have seen some improvements in conditions of employment since Mandate began our campaign within the company, but there is still a lot left to be achieved.”

The trade union Mandate said that TK Maxx had “reluctantly gave a small pay increase” and even “bought two goldfish as a peace offering” but members wanted a permanent solution to problems.

“Already the company has rolled back on some of these hard won benefits, so our members will be going on strike to achieve a permanent solution to these problems,” Mr Meegan said.

Mandate members in TK Maxx in Bridgewater Shopping Centre, Arklow will now engage in a one day stoppage tomorrow, with the possibility for escalation in the future.

New Tourism Brand for Arklow as ‘Visit Arklow’ is launched