Wicklow minors advance to Leinster semi-final with win against Meath 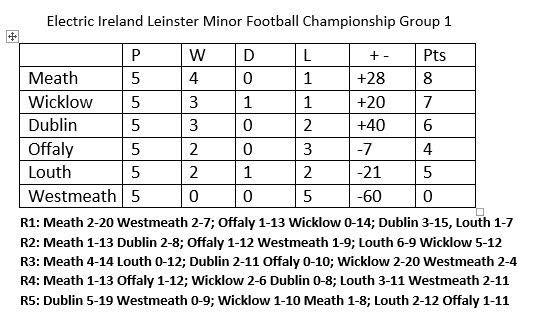 The Wicklow minor footballers have set up a Leinster championship semi-final against Kildare after coming from behind to defeat Meath on Tuesday evening.

Meath were much the better side in the first half and went into half-time with a two point lead. However, an energetic and clinical second-half display — including a priceless goal from Oisin Cullen — turned the tide in Wicklow’s favour as they came away with the win and a date with Kildare in the Leinster semi-final.

Kevin O’Brien’s Wicklow side went into the crunch encounter having shocked Dublin last time out.

However, despite the momentum being on the side of the Garden lads, Meath started much the brighter on a warm sunny evening at Joule Park. They countered Matthew Ging’s opening score to lead five points to one after 27 minutes.

Ging would score twice more but Meath ended the first half much the happier at 0-5 to 0-3.

Kevin O’Brien must have had something to say to the players at half-time as Wicklow came flying out of the blocks in the second period. Craig Maguire levelled the game with a pair of points early on.

Wicklow goalkeeper Ben Fennell made a great stop to deny Meath their first goal. He made another save and, from the resulting counter, Oisin Cullen dispatched a terrific finish for Wicklow’s first goal which turned the game massively in the Garden’s favour.

Despite the early setback, the Royal county showed tremendous heart to fight their way back into the lead with a goal and point. However, points from Matthew Ging and John Keogh put Wicklow back into the lead by a single point with just eight minutes remaining.

The games decisive score came deep into injury-time when Eoin Darcy, who had been terrorising Meath’s back-line all half, earned a free which was duly slotted over by Matthew Ging to extend Wicklow’s lead to two points.

Meath continued to fight but to no avail as Wicklow came out on top by a final score of 1-10 to 1-8. This win sets up a Leinster minor football championship semi-final against Kildare in Newbridge for Wicklow, while Meath will face Laois in the other semi-final.

Throw-in for Wicklow vs Kildare takes place at 2pm in Newbridge this Saturday, the 7th of July.