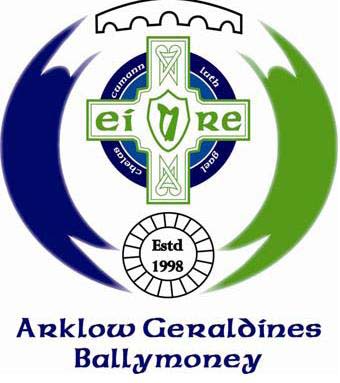 AGBs Senior Men faced Baltinglass on Saturday evening in wet and wintery conditions in Joule Park Aughrim. A strong first half saw AGB advance well and the momentum and courage grow through the AGB men as they ploughed their way up the field. Huge efforts were made to ensure they were leading at half time after a great first half and AGB lead 3-04 to Baltinglass 0-06.
The second half saw Baltinglass come out strong and determined but they never quite made that mark on AGB who powered on. There were some very close encounters when Baltinglass began to clock up their points but AGB maintained their own on the pitch and continued strong. The final score saw AGB finish 4-06 to Baltinglass 1-11. A huge victory for AGB, and one that hasn’t been seen since 1960 when an Arklow team defeated Baltinglass in Championship.
The next senior championship match for AGBs men is Saturday 25th of August in Ashford where they take in St. Pat’s at 7pm.
AGBs Junior Bs travelled to Hollywood on Thursday evening to play them. A tough encounter for the Junior Bs saw them fall slowly behind Hollywood in the first half, where Hollywood were in the lead by half time. The second half saw much more action from AGB who quickly began to catch up with the scores. A final score of AGB 2-11 to Hollywood 2-14 saw the match end in Hollywood’s favor. This result means AGB don’t move through to the next stage of the junior b championship. Well done lads on a great junior b campaign.
AGBs Intermediate Ladies continued their Championship campaign last Sunday morning to Bray at home in Ballymoney. An unfortunate show if numbers for Bray saw them start with only 12 girls after a discussion with management and the referee. AGB powered on and played excellent football against a good Bray side. Final score saw AGBs ladies finish 8-13 to 1-04. Well done girls, the semi final looms next.
AGBs Senior Ladies took the road to Baltinglass on Friday night where they played a great game of football in their championship. A level score at half time of 1-04 to 0-007 saw both teams come out full of action and ready to go in the second half. The AGB girls played a great game and were unfortunate to finish 1-09 to 0-17, after putting in huge efforts. Well done girls.
AGB received €1,500 of free equipment today as winners of @Beko leinster GAA Bua award. Equipment was presented by Games Manager Hugh Kenny.
Huge Thank You to all who worked hard in the background to secure this.
U15s
Great football action last Wednesday night saw both U15s teams finish with a win. U15(2) finished 10-15 to 3-6 to Bray Emmett’s and U15(1) finished 4-06 to 3-06 to St. Pat’s. Well done lads.
AGBs All Ireland tickets draw was held in AGBs Ballymoney Complex on Tuesday night the 14th August at 8pm. All winners will be contacted. Thanks for your continued support of AGB.
Croke Park for All Ireland Ladies Finals’ Day
Terry Canavan is once again organising the annual  trip to Croke Park for All Ireland Ladies Finals’ Day on Sunday the 16th of Sept 2018. Cost will be €15 for children and €20 for adults. If u8s are going they must be accompanied by an adult. All others need adequate supervision so we will need adults to help out on what is always a great day for ladies football and the LGFA. Last year the numbers attending broke all records to date and this year the organisers are hoping to do even better! If interested can you please confirm through you admins by August the 15th so Terry can order tickets and collect deposits/payments in full.
Arklow Geraldines Ballymoney Club Gear is now available to buy directly from O Neills. Kit yourself out in this seasons most wanted AGB clothes. Simply visit ONeills.com, click on Your Club banner, Search for Arklow Geraldines Ballymoney.
The next meeting of the Arklow Geraldines Ballymoney Club Executive is scheduled for Tuesday September 4th in Pearses Park