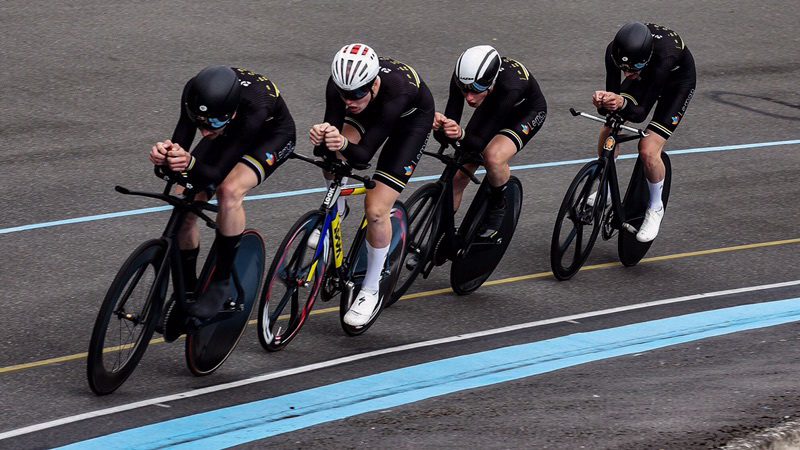 The elite national team champions were decided on the Sundrive Velodrome in Dublin on Saturday 11th August, 2018, with The Sports Room Racing Team taking first place. A super victory for Cian Keogh, David O’Sullivan, Mark Smith and Sean Murnane, made all the sweeter by the fact that two of the team are first-year juniors competing at senior level.

The team was the youngest team competing in the event, with an average age of seventeen. But no doubt, youth was on their side with an amazing win on the day.

What is a team pursuit champion you might ask? Many of you may be familiar with track cycling from the Olympics – an exhilarating bicycle racing sport held on specially built banked tracks or velodromes using track bicycles.

Despite the fact that Ireland doesn’t have a velodrome yet, we have some very successful track cyclists, including The Sports Room Racing Team. Team Pursuit is a 4km timed event where there are four riders who work together to complete the distance in the fastest time possible.

The Sports Room Racing Team had a winning time of 4 minutes 43 seconds, only 5 seconds off the all time record.

Cian Keogh, who has been working in The Sports Room, Wicklow Town for the last two years is thrilled with the win. “I’m delighted” says Cian. “We didn’t have the highest expectations coming in to this race. It just went perfectly on the day and everything we had practiced came together nicely thanks to former National Coach Frank O’ Leary. We will certainly look to come back stronger next year and attempt the record.”

“We are looking in to doing a few UCI races abroad over winter to show off the National Champs kit and gain some more experience,” he adds. “It’ll be self funded so hopefully we can get some people behind us to help.”

Coach, Frank O’Leary is extremely proud of these four guys. “When Cian and myself set up the team at the end of last year, we listed the National team pursuit championships as major goal for the season. We started track training in February and with a lot of hard work since then, this has resulted in the Gold medal. Considering Mark and David are first year Juniors, Sean and Cian are in their first year as Seniors it’s a phenomenal ride. Well done Mark, David, Sean and Cian. 4 national champions!” 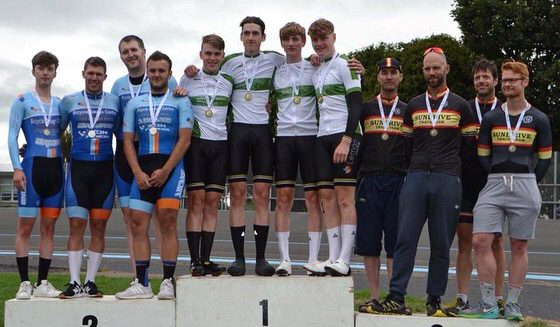 The Sports Room Racing Team are not unaccustomed to winning. In July this year, Cian took victory in the main event at the Brendan Campbell Memorial with Mark Smith finishing strongly in 3rd and Sean 2nd, A2. David O’Sullivan had a brilliant sprint victory in the Shannonside GP earlier in July too.  “We are thrilled with how well the guys are doing in their events, not only are they doing well on the national stage but internationally too.” says Mark Williams, owner of The Sports Room in Wicklow Town. “Cian is taking a year out of college this September to pursue his cycling career and we wish him the very best of luck, thankfully he’ll still be able to help us out in the workshop!”