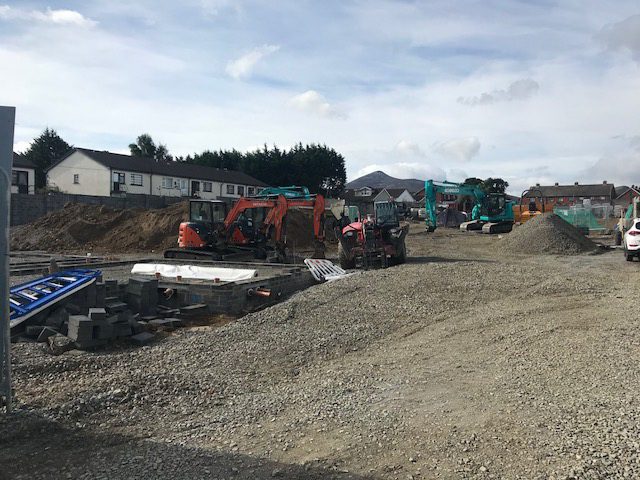 Wicklow Sinn Féin TD John Brady has expressed serious concerns as work grinds to a halt on 42 Social houses on Kilbride Lane in Bray that are currently under construction. The developers have encountered financial difficulties which have resulted in work ceasing on the critical housing project.

Teachta Brady who visited the site on Friday morning said “I unfortunately had it confirmed that the developers constructing the 42 new units in Kilbride Court in Bray have encountered financial difficulties. This has resulted in all work on the site on Kilbride Lane ceasing.”

“It is hoped that the cessation is only a temporary one and all issues will be resolved swiftly and that work can recommence in a week or two.”

Cllr Dermot ‘Daisy’ O’Brien “It has taken over 10 years to get to the stage where houses are finally being constructed on the site on Kilbride Lane. There have been too many delays, given the scale of the housing crises the last thing anyone needs are further delays in building these critically important 42 units. Hopefully all issues can be resolved and that work can restart as soon as possible.”

Teachta Brady went on to say “Unfortunately in Bray we have witnessed difficulties with the developers constructing two new schools Coláiste Ráithín and Ravenswell. The construction of the Dargle Flood Protection Scheme was also seriously delayed after the developer went bust.”

Teachta Brady concluded “I hope that the issues facing the developers can be overcome and that work can start as soon as possible. Great progress has been made since work started on site and it’s critical that these 42 units are delivered as quickly as possible to try help deal with the housing crisis.”