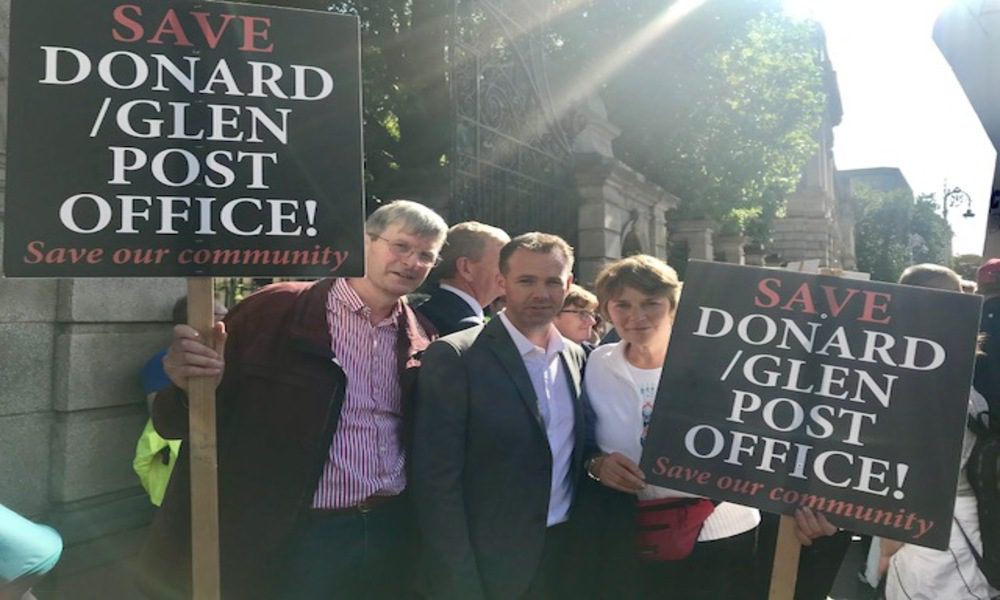 A Sinn Féin motion has been passed to support the Post Office Network following the announcement that 159 post offices around Ireland would be closed.

Sinn Féin TD John Brady has welcomed the motion and has insisted that now Fianna Fail and Fine Gael must work to ensure that the post offices, two of which are in Co. Wicklow, are saved.

“The decision by the government to cull 159 Post Offices from the current network is a direct attack on rural Ireland. It is also in contravention of its own stated commitment in the Programme for Government to provide additional services for Post Offices, including government services i.e. motor tax renewal.

“The erosion of the Post Office network, in addition to the closure of Garda stations, rural schools and transport systems is having a hugely damaging impact on rural communities.

“Fine Gael and Fianna Fail view the Post Office Network as a burden. From 2000–2011 under Fianna Fáil 732 post offices closed their doors. Now Fine Gael wants to close 159 more, including 2 in Wicklow, Donard and Coolboy.

“The loss of more post offices, on top of those closed by Fianna Fáil, means that a vital social hub for local people, especially older citizens, will reinforce the sense of isolation many of them feel. This increases mental health issues, heightens loneliness and the risk of suicide.

“Post office masters and mistresses are entitled to retire. But this does not mean the post office itself retires.”

Brady said that the criteria that An Post used as justification to close certain offices was faulty and that it does not take into account the true population of an Ireland that has a dispersed and largely rural population.

“Over 33% of the population of over 1500 that Donard Post Office currently serves will live more than 15 kilometres away from the Dunlavin Post Office if Donard closes. This will be a round trip of 30 kilometres or more.

“The reality is that while in government both Fianna Fáil and Fine Gael have subverted the Post Office system and undermined the provision of services to rural Ireland.

“What the Post Office network needs from this government is a coherent, properly resourced strategy with firm proposals that will secure the future of post offices and of the thousands who are employed by it.

“In the Programme for Government agreed by Fine Gael and Labour in 2011 there was a firm promise to ‘ensure that the network of post offices around the country is maintained and that communities have access to adequate postal services locally.’ It didn’t happen.

“The Programme for Government in 2016 was even more specific in its support for the Post Office Network and it promised that the government would act swiftly on the recommendations of the Post Office Business Development Group.