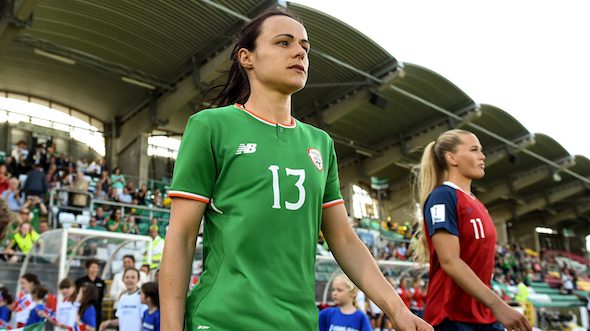 Áine O’Gorman has announced her retirement from international football after 12 years and 100 caps.

The 29-year old won her first international cap for Ireland at the age of 16 in the 2006 Algarve Cup against Denmark and has had a storied career for her country.

The Wicklow-native achieved her 100th cap for Ireland in a 1-0 defeat against Norway in June.

O’Gorman scored 13 goals for Ireland, including a hat-trick against Montenegro in June 2016 in a 9-0 win at Tallaght Stadium.

“Áine has had a fantastic international career and has had a profound impact on the growth of the sport in this country,” Bell said in a statement.

“For any player to get over 100 caps is a fantastic feat and she should be very proud of her achievements. Ever since I began my management of the team, Áine has been a fantastic person to work with.

“I really hope that Áine will stay in the game and contribute even further to women’s football.

“She has fantastic experience and knowledge which would be invaluable to young players, and I really hope to see her look to pursue the coaching pathway,” Bell said.

Best of luck to @Aineogor9 on her retirement from international football. The 100 cap holder assisted the game here to reach a new level both on and off the field, setting standards for the next generation of young Irish sports women to follow #aineirishlegend pic.twitter.com/BXvWNWwhkJ

In an open letter, O’Gorman thanked her teammates, coaches, and the fans for all of their support over the past 12 years.

“It has been an incredible journey with the team over the years and one which has been such a huge part of my life. Every time that I’ve pulled on the Ireland jersey, it has been a moment of incredible honour for both my family and I. But now, I feel it is time to step aside and let the next generation make their mark,” she said.

“Back in 2006, I could never have imagined that my international career would see me reach 100 caps when I made my debut at the Algarve Cup against Denmark. Despite only being 16 years of age, Head Coach Noel King believed in me and brought me into the senior squad. I will always be thankful to him for giving me the opportunity and platform to begin my international career.

“Of course, there will always be a tinge of sadness that we were never able to qualify for a major international tournament. We came close on a few occasions but it wasn’t to be. I’ve no doubt that the work currently being done with the national team now will see them achieve that qualification in the future.

“Winning my 100th cap back in June against Norway will always be one of my proudest moments, despite the result. To get to lead the team out on that special occasion was a privilege and it was an incredible milestone to reach for my country. I’ve scored 13 goals during my international career and whilst I thoroughly enjoyed scoring each one, my goal against Portugal, in particular, is the one which will always stick out. It was such a difficult game against a tough team away from home and that goal kept our qualification hopes alive at the time.

“Not only have I enjoyed my time with the national team because of the football, but also because of my fantastic team-mates down the years. When I first came into the national team, the players I looked up to, like Olivia O’Toole, Ciara Grant and Yvonne Tracy, made me feel so welcome. It can be quite a daunting place to come into but I was able to learn so much from those players and it was a privilege to share a pitch with them. Emma Byrne was a fantastic captain over the many years we played together and also, I’d like to thank Stephanie Roche for being a fantastic best friend and room-mate, and for putting up with me!

“Now, as I look to the future, I’m determined to give something back to the game I love. I’m hoping to take my UEFA B Licence very soon and begin my journey in coaching. Having come through the player pathway myself, I think it’s incredibly important to have the guidance of former players and I feel like my experiences could benefit future generations.

“I want to thank Noel King, Sue Ronan and Colin Bell, all the coaches and backroom staff throughout the years, and I wish the current team all the best for the future. There was so much progress made during the last qualifying campaign and the amount of young talent coming through the underage sides is a great sign for the future of the game in this country. I’ll be the Women’s National Team’s biggest fan from now on and I’ll be the first through the turnstile at Tallaght Stadium to cheer on the girls in green.

“Finally, I want to thank my family and friends. The support they’ve shown me over the years has been incredible and without them, all of this would not have been possible.”