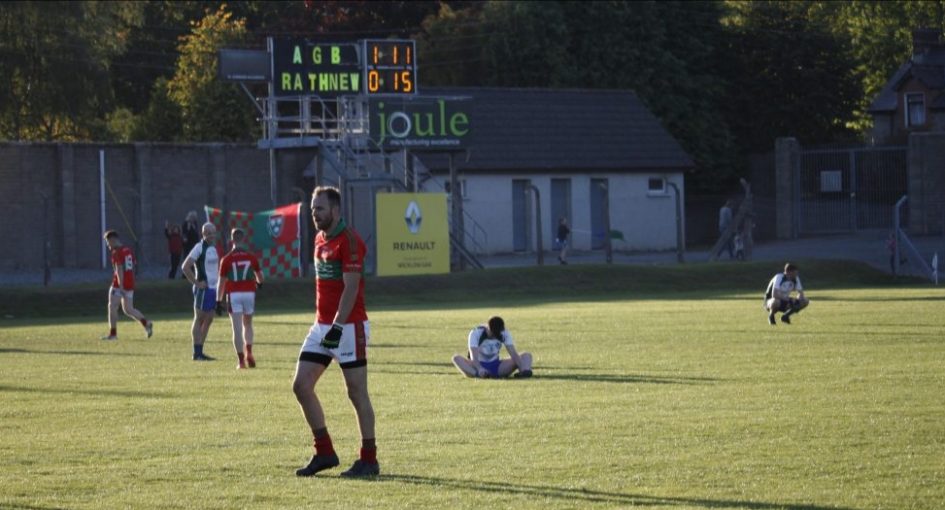 It was a story of two halves in Aughrim on Saturday as the experienced Rathnew had to overcome a brave second-half comeback from the youthful Arklow Geraldines-Ballymoney to secure their place in the final of the Renault Senior Football Championship.

Rathnew opened up a comfortable six point advantage going into the second period as a wasteful AGB side couldn’t match the defending-champions’ accuracy.

The second-half threatened to be more of the same when Rathnew managed to extend that lead to seven going into the final 15 minutes through a hat-trick of points from Nicky Mernagh. However, a brave and spirited comeback from the Arklow men, buoyed by a Philip Healy goal, sparked by a frantic final stretch which saw AGB claw back the deficit from seven points to just one.

However, a key final score from Jody Merrigan sealed the game for Rathnew as they await one of Hollywood or St. Pat’s in the final of the senior football championship.

Looking back on the game, AGB will rue a first-half which saw them bogged down by inaccuracy on their part as their shooting went wayward on more than one occasion.

While Leighton Glynn (2), Eddie Doyle (2), and Jody Merrigan proved clinical as they put Rathnew into a five point to no score lead after 15 minutes, AGB could only register seven wides in that time as the game threatened to get away from them.

Cal Kelly did manage to notch AGB’s first score of the game after 16 minutes, which was then followed by a goal chance which was cleared off of the line, but Rathnew had an answer through Mark Doyle’s free.

In fact, every time AGB managed to register a score, Rathnew had an answer for it. Philip Healy was countered by Mark Doyle. Stephen Hurley was followed up by Nicky Mernagh. Finally, Cathal Kelleher was answered by Eddie Doyle as, despite AGB’s best efforts, Rathnew went into half-time with a deserved ha;f-time lead of 0-10 to 0-04.

While he may not have registered any of his own scores in that first-half, or in the game in general, James Stafford was just as big a part of their dominance in that first 30 minutes. While AGB looked to play intricately out from the back, Rathnew opted for the long-ball game, which was boosted by Stafford’s dominance in the air as every ball stuck to him, which allowed for Rathnew to build their tally from there.

The early stages took on a similar pattern in the early stages as Stafford continued to dominate in midfield. Nicky Mernagh’s double, as well as a score from Eddie Doyle following a strong run from Danny Staunton through midfield, pushed Rathnew into a six point lead inside the first 15 minutes of the second-half.

Matters almost turned from terrible to catastrophic for Arklow when substitute Warren Kavanagh charged at the AGB goal. He smashed the ball goalward, only for Mervyn Travers to dive to his right-hand side to brilliantly deny him and Rathnew their first goal of the afternoon.

While Mernagh split the posts minutes later to stretch Rathnew into a seven point lead, that Travers save sparked what would be a dramatic final quarter of an hour which saw AGB claw back Rathnew’s seemingly insurmountable lead.

Philip Healy kicked things off with a free to reduce that lead to six, before AGB turned the game on its head dramatically minutes later.

With 12 minutes left on the clock, AGB took a quick free-kick towards Cormac O’Shea. O’Shea, who struggled throughout the game, lept above the Rathnew defender to fist the ball towards Philip Healy. Healy made no mistake and put the ball past Peter Dignam to put AGB to within one score of their opponents.

Eddie Doyle should have restored that six point advantage when he struck the bar in a situation from which he netted Rathnew’s first goal. Christopher O’Brien and John-Paul Hurley pointed for Arklow to reduce the deficit to just a single point before Nicky Mernagh split the posts with just five minutes left on the clock.

Mernagh’s score proved vital for the defending champions. Philip Healy pointed from another free to narrow the score to a minimum. However, Mernagh’s point proved to be the winner. Despite earning a late free, Stephen Hurley was unable to make it count for a brave Arklow side as they were unable to complete their heroic second-half comeback.

It was a case of experience triumphing over ambitious youth on the day as Rathnew maintained their pursuit of a two-in-a-row county championship. Meanwhile, AGB will take solace from a brilliant second-half performance from a team which will have their time in the sun the near future.