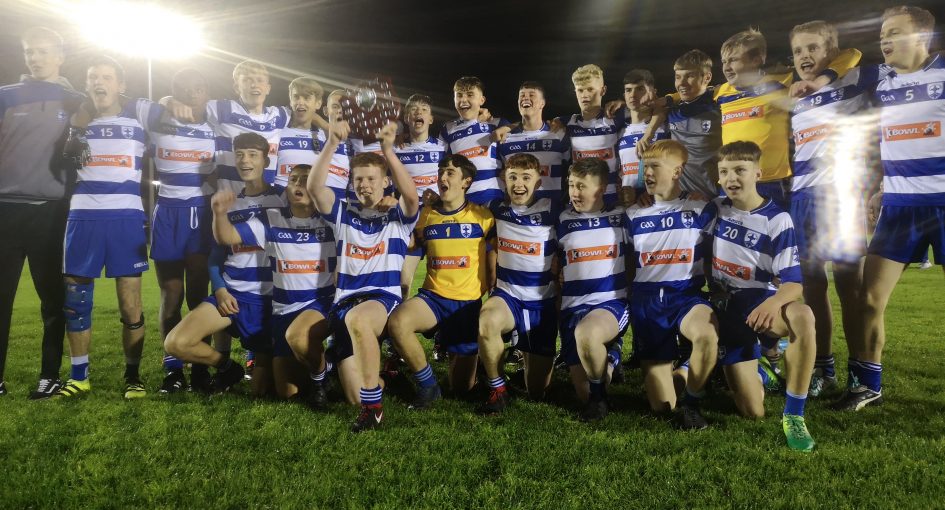 104
SHARES
ShareTweetSubscribe to our Newsletter

The Blessington minor footballers are 2018 Division 2 league champions after a clinical second-half display saw them stroll their way to a 3-16 to 2-5 win over St. Pat’s on Friday evening.

The game looked poised for drama at half-time after Blessington’s bizarre first goal helped them go into the dressing room at the interval with a 1-6 to 1-3 lead after a Pat’s goal had clawed back an early three point deficit.

However, an inspired second-half performance, led by a man-of-the-match calibre showing from Kevin Quinn, sealed what proved to be a comfortable title win for Blessington, with further goals from Danny Silk-Featherson and James Mulligan breaking St. Pat’s spirits.

The cold Autumn air that welcomed the players in Ballinakill accommodated a red-hot Blessington start, as early points from Jamie Hamilton, Thomas Fisher and the excellent Jake O’Kelly raced them into a three points to no score lead.

Pat’s rebounded straight away through a goal from Aaron Byrne. The Wicklow Town men almost scored a second goal when Matthew Ryan’s clever pass led to a shot which was well saved by Michael O’Toole in the Blessington nets.

Blessington fell behind minutes later to Pat’s first point of the game, only for Jake O’Kelly to respond a free and two points from play to restore his side’s lead to 0-6 to 1-1.

Kevin Quinn drilled a shot for goal wide before Pat’s finished the half strongly, as points from Mark Whelan and Craig Anderson drew Pat’s level. Unfortunately, a freak Blessington goal from Kevin Quinn following a 45 which deflected off of several players in front to Patrick Sammon’s net sent Blessington into half-time with a one goal lead.

The scare at the end of the half which came with Pat’s clawing Blessington back seemed to spur the latter on as they stormed out of the blocks at the start of the second period. St. Pat’s first of only two second-half scores was sandwiched between two further points from O’Kelly, two from Quinn, and one for Eoin Kavanagh as Blessington charged into a seven point lead.

The league title was all but sealed for Blessington after a goal from substitute Danny Silk-Featherson extended their lead to 10. The scores kept coming from a Blessington side who sensed blood. Kevin Quinn continued to assert his dominance on the game with two further points to add to his tally, before their third goal was scored in a fashion fitting the performance.

Collecting the ball on the left flank, James Mulligan twisted and turned before smashing the ball past Patrick Sammon into the far corner of his goal.

Blessington notched another point moments later before Pat’s finally added to their score after 20 second-half minutes through a Cian O’Brien free. Matthew Ryan smoothly slotted home a penalty with four minutes left to play to add a bit of gloss to proceedings before Jake O’Kelly notched his and the game’s final point as Blessington clinched the Division 2 title in style.