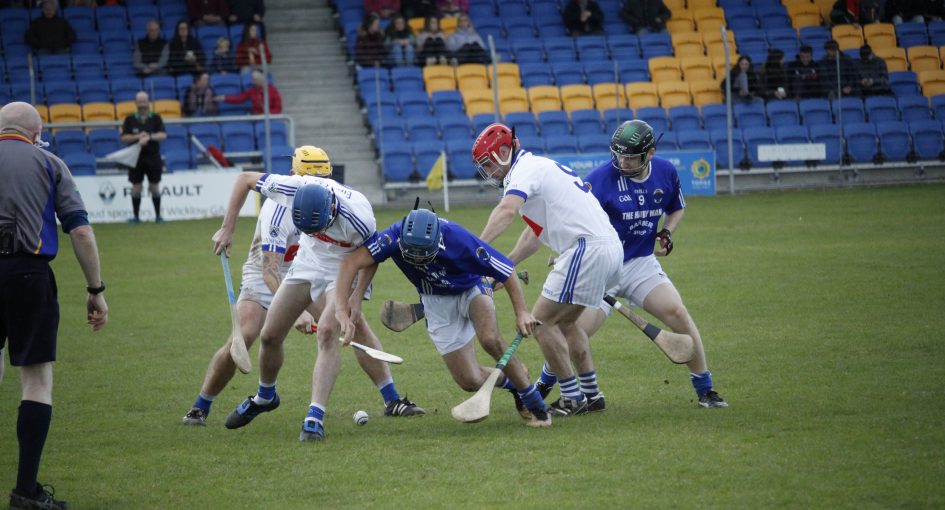 Extra-time was required as St. Pat’s overcame Éire Óg 1-18 to 1-16 to reach the senior hurling championship semi-finals following a pulsating quarter-final in Aughrim on Sunday afternoon.

Both sides were deadlocked at 1-12 apiece at the end of regulation time after two stoppage time frees from Andy O’Brien cancelled out a dramatic late goal from Éire Óg’s Anto Byrne.

However, a terrific display from the Wicklow Town men in the second period of extra-time proved the difference, as two brilliant long range points from Christy Moorehouse helped them on their way to a 1-18 to 1-16 win and a place in the semi-finals of the senior hurling championship, where they will meet defending champions Glenealy

Compared to their extra-time showing, the St. Pat’s performance in the first-half of the regulation 60 minutes was disappointing.

After scoring an early goal through George O’Brien inside the first 45 seconds, Pat’s didn’t manage to score for another 10 minutes, in which time Éire Óg began to take control.

A pair of points from Michael Walsh, and another from Anto Byrne, brought the Greystones men level, before further points from James Connolly and Andy Walsh swung the game in their favour before Pat’s got their next point through Michael Connors.

A free from James Connolly and a point from Leon Browne asserted Éire Óg’s superiority, as they went in at half-time with a two point lead at 1-04 to 0-09.

The changing weather conditions from sun to pouring rain for the first few minutes of the second-half brought with it a change in fortunes for the Greystones men, as St. Pat’s came storming out of the blocks to level the game up at 1-06 to 0-09 inside the first five minutes of the restart through a pair of Andy O’Brien points. This comeback came despite the dismissal of Terry Healy, who was sent off between the two early points.

After trading points to bring the score to 1-07 to 0-10 with 16 minutes into the second period, neither side scored again for six minutes, until yet another free from Andy O’Brien put Pat’s in front for the first time. That lead was extended to three points as George O’Brien and Christy Moorehouse both split the posts as Pat’s continued in the ascendancy.

Leon Browne got a pair of points for Éire Óg to reduce the deficit to just one point before Anto Byrne turned the game on its head as the clock ticked over into five minutes of added time.

Billy Cuddihy broke into midfield with possession as the crowd was whipped into a frenzy. His long ball through the middle was collected by Andy Walsh who, in turn, helped the ball on to Anto Byrne on the right. Byrne composed himself, picked his spot, and fired the ball into the Pat’s net. The Greystones men were two points ahead in additional time and seemed poised to come out on top in the most dramatic of fashions.

But the drama was not over.

Minutes after falling behind, Andy O’Brien notched yet another free between the posts before Nick Arrigan was sent off for Éire Óg. The stage was set for Andy to send the game into extra-time with another free to end regulation time with the score at 1-12 to 1-12.

Pat’s started extra-time in much the same way as they finished the second, with George O’Brien making a strong run down the right flank to put the ball between the posts to give his side the lead once again.

James Connolly responded with two frees for Éire Óg before Andy O’Brien replied with a free of his own to send the two sides into the break in extra-time level once again.

In the end, despite how dominant Éire Óg were at the start of the game, there was nothing they could do to deny Pat’s a place in the semi-finals after the start of the side’s resurgence in the second half of regulation time. George O’Brien and Andy O’Brien put Pat’s into a two point lead before two magnificent long-range strikes from Christy Moorehouse put the game all-but-beyond the Greystones side.

Despite points from Dan Kelly and Anto Byrne reducing the deficit to just two points, Éire Óg did not have enough time to peg back the deficit as Pat’s emerged victorious in a thrillingly dramatic encounter fitting of a sport which has captured the hearts and minds of fans in 2018.

Next up for St. Pat’s is a senior hurling championship semi-final against the reigning-champions Glenealy.