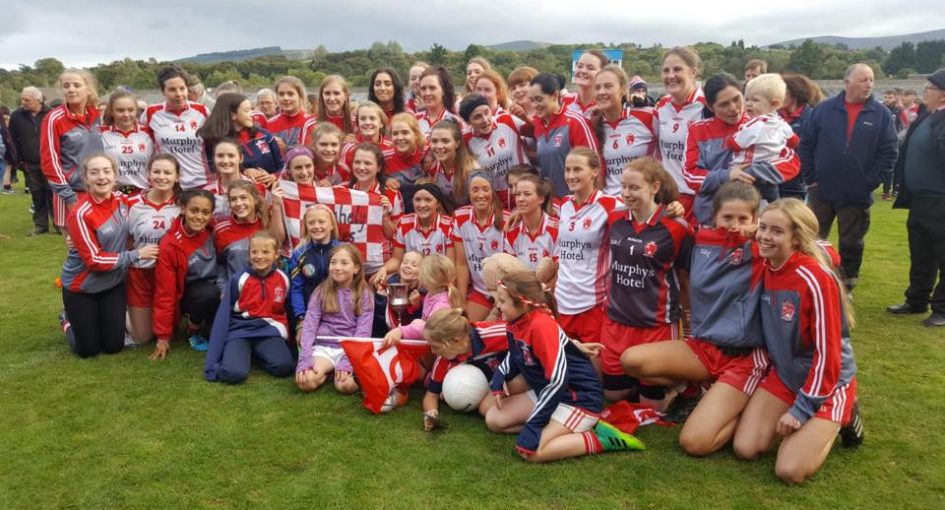 Laura Hogan scored two goals as Tinahely put in yet another five-star performance to beat Wexford champions Kilmore and book their place in the semi-final of the Leinster intermediate football championship.

Hogan got two of five goals for Tinahely, with Rachel Byrne, Loretta Gilbert and Aine Byrne notching the other three as the Wicklow senior champions blitzed a hapless and outmatched Kilmore side.

The closest Kilmore got to Tinahely was when they were briefly level one point apiece early in the second-half. Tinahely began to put their opponents to the sword through Hogan’s first goal of the afternoon, followed by points from Hogan, Ciara Byrne, and Aine Byrne as the Wicklow ladies pushed out to a 1-06 to 0-01 lead before their Wexford counterparts knew what was happening.

That eight point lead was extended to 11 when Rachel Byrne netted her own goal. Kilmore bounced back with two points, before Loretta Gilbert scored her side’s third goal of the half.

With just 15 minutes on the clock, Tinahely were leading 3-07 to 0-03 — 13 points. The Wicklow side continued to take advantage of playing on their home soil, as Ciara Byrne pointed to push the lead to 15.

Aine Byrne netted to push her side into a  point lead, before Kilmore scored a goal of their own to put a bit of gloss on the scoreline. Finally, Laura Hogan capped off an astonishing first-half Tinahely performance with her second goal of the afternoon to send her side into half-time with a mammoth 5-13 to 1-04 lead — 21 points.

While the first-half saw Tinahely notch an astonishing five goals to put Kilmore to bed, the second period was entirely goalless. However, Tinahely did manage to extend their lead further to 28 points by the time the referee mercifully called time on the goal — however all of those scores came from splitting the posts.

Tinahely, who have now scored 10 goals and 33 points in their last two games — making a grand total of 63 points — will now meet Dublin intermediate champions Clontarf in the Leinster semi-final next week.