One Game, Two Many: St. Pat’s knocked out of Leinster championship 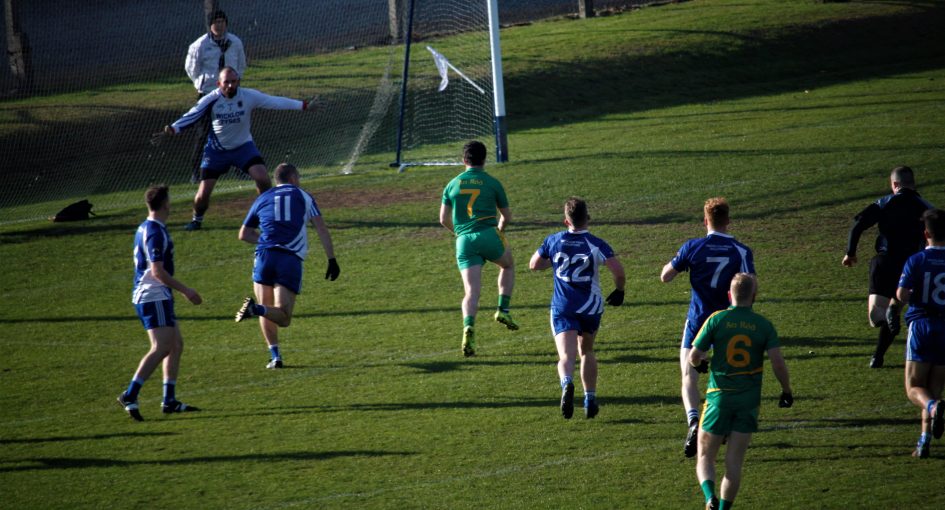 Two matches in less than 24 hours proved too big a hurdle to jump for St. Pat’s, as they were knocked out of the Leinster senior club football championship at the hands of Rhode on Sunday afternoon.

Casey O’Brien’s men played the Offaly champions less than a day after dethroning Rathnew 0-10 to 0-08 to win their first Wicklow senior football title since 2012.

That recovery time, or lack thereof, told on the day, as a visibly fatigued Pat’s side couldn’t keep up with the energy and commitment demonstrated by a well-charged and classy Rhode side.

The Wicklow champs found themselves five points down at half-time thanks to six points from the outstanding Niall McNamee, as well as two points from an Anton Sullivan who was dragging Pat’s corner-back Wayne Doyle around at will.

Pat’s got the first score of the second-half but it was mere momentary rest-bite, as goals from Ciaran Heavey and Anton Sullivan cemented Rhode’s dominance. Tommy Kelly netted late on for Pat’s but it was too little too late as Rhode advanced to the second round of the Leinster senior football championship with a comfortable 2-16 to 1-09.

These changes seemed to give Pat’s a new lease on life early on, as Stephen Duffy picked up where he left off against Rathnew by pointing two frees to give Pat’s an early advantage. Rhode finally got their first score through Ciaran Heavey on six minutes, and found themselves in front five minutes later through three points from the tireless Niall McNamee.

The full-forward triumvirate of Heavey, Sullivan and McNamee was causing all sorts of problems for Pat’s, with Sullivan proving to be a massive handful in particular. Meanwhile, Niall Darby’s work in the half-back line set the stage for Conor McNamee to pull the strings further up the pitch.

Rhode’s lead was extended to 0-06 to 0-03 through a Niall Darby free and another point from Anton Sullivan after outstrengthening Wayne Doyle wide on the left. Another McNamee free followed a Stephen Duffy free for Pat’s, before Sullivan set up Heavey for Rhode’s eighth point of the game with a minute left in the first-half.

Patrick O’Keane capitalised on a clever Ciaran Doyle pass to reduce the deficit as Pat’s looked to finish the half the stronger, only for McNamee to respond with a free and a peach from wide on the left to send the visitors into half-time with a 0-10 to 0-05 lead.

The half-time break, and the introduction of Jonathan Delahunt in place of Jordan Petticrew, did nothing to ease the fortunes of a Pat’s side whose legs continued to tire as the game went on. Duffy did manage to point the first score of the half for Pat’s through a free inside the first two minutes, before Rhode shut down any and all hope of a Pat’s comeback two minutes later.

Bursting through on goal, James McPadden saw his shot well saved by Colm Byrne, only for Ciaran Heavey to take advantage to poke the ball into an empty net to make the score 1-10 to 0-06. Niall McNamee followed that up with a point from a 45, before Tommy Kelly and Dean Healy reduced the deficit to six points.

Another peach of a free from McNamee from beyond the 45-metre line pushed that back out to seven, before Stephen Duffy was black-carded for a high-tackle on Alan McNamee. The loss of Duffy, who was so instrumental in Pat’s winning the senior title on Saturday, was a kick to the stomach for the Wicklow side, as Rhode pushed on with two more points from Niall McNamee and Anton Sullivan before the latter netted a well-worked second goal of the day.

Bearing down on goal, Pauric Sullivan moved the ball onto McNamee, who showed great awareness to dink the ball over Colm Byrne in the Pat’s goal for Sullivan to latch onto and smash into the empty net as Rhode saw their lead pushed out to 12 at 2-14 to 0-08.

Despite their unfortunate circumstances, the Pat’s lads showed the desire that saw them beat Rathnew as they continued to run themselves into the ground in pursuit of a way back into the game.

Paul O’Brien, who was brought on for Jack Dunne in the second-half, cut the ball back hopefully from the byline. Rhode seemed to have the situation under control, only for two of their defenders to comically trip eachother up, gifting Tommy Kelly the chance to latch onto the ball and put it past Kenny Garry for his side’s first goal of the day.

That goal proved to be a mere consolation for the Wicklow champions, as another two points from McNamee sealed victory for Rhode, who would have had a third goal had Niall Darby not missed a guilt-edged chance at the death.

Rhode now march on to the second round of the Leinster senior club football championship, while Pat’s can look back and celebrate an excellent county championship winning campaign.