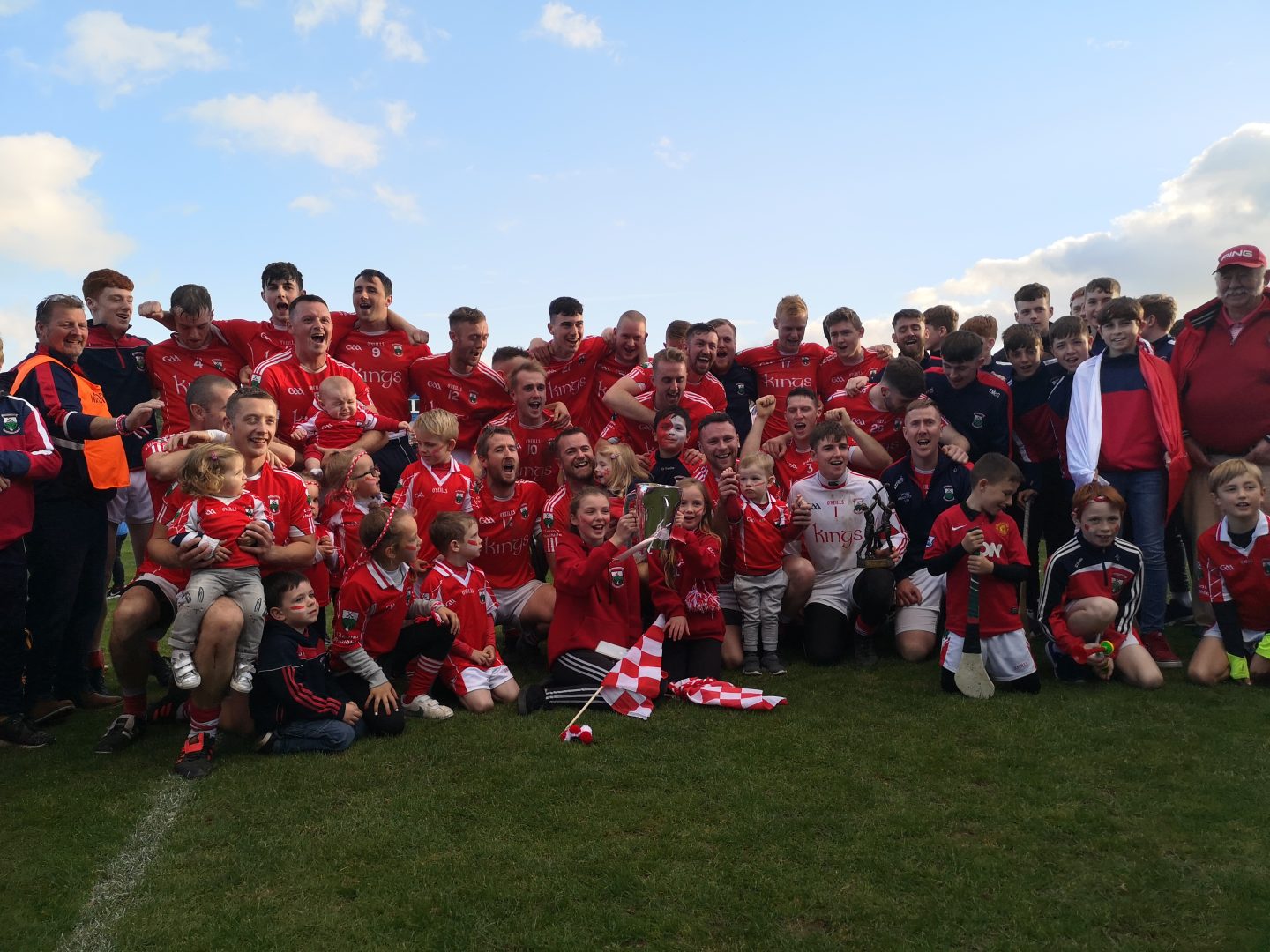 Glenealy have retained the Wicklow senior hurling championship after a Jonathan O’Neill Jr. double, as well as heroic goalkeeping from man-of-the-match Cian Staunton, helped them on their way to a dramatic 4-10 to 1-12 win over a brave Carnew Emmets side.

Gary Laffan’s defending champions seemed to have the title in their grasp following a one-sided first-half — including two quick fire goals from Gavin Weir and Jonathan O’Neill Jr. in the final 10 minutes — saw them go into the break with a 2-07 to 0-03 lead over a wasteful Carnew side.

However, James Hickey’s men came roaring back in the second half as a scoring spree, helped along by a goal and five points from the excellent Enda Donahoe, saw them reduce the deficit to just two points at 3-07 to 1-11.

Carnew continued to push for more but found themselves being denied on a regular basis by Danny Staunton, Warren Kavanagh and the excellent Cian Staunton. At the other end, Glenealy showed the stuff of champions to overcome this brave fightback, with Gary Hughes slotting a peach of a point from range before Leighton Glynn bulged the back of the net with the pivotal final goal as Glenealy came away with the win and back-to-back titles.

Glenealy went into Sunday afternoon’s final in Aughrim as favourites to retain their hurling crown, and the first-half demonstrated just that. Despite falling behind to a Conall McCrea point inside the first minute, Glenealy were in front after the fourth following points from Warren Kavanagh and Robert Byrne.

A couple of frees from Jonathan O’Neill Snr., as well as a tremendous point from Paul O’Brien from wide on the left, extended that lead to four points, before Enda Donahoe got Carnew’s first score in 20 minutes with a free that brought Glenealy back to within a goal.

Aside from that Donahoe free, the final ten minutes of the first half could not have gone much worse for Carnew than it did. First, Jonathan O’Neill Jr. showed great awareness to grab possession in front of the Carnew goal before working it to Gavin Weir, who then netted for Glenealy’s first goal.

Barely 60 seconds passed when, in the 23rd minute, O’Neill went from provider to scorer after latching onto a Robert Byrne pass to score the game’s second goal.

Enda Donahoe had the chance to reduce the deficit in the 25th minute when Carnew were awarded a penalty, only to see his mishit strike saved by Cian Staunton — the first of three big saves that Staunton would make in the game. Their situation was not helped by wasteful and wayward shooting, with Jack Doyle and Timmy Collins being amongst six wides for Carnew in the first-half, as Glenealy went into the break with a 10 point lead at 2-07 to 0-03.

Much like he did in the famous AIB advertisement a few years back, Carnew boss James Hickey must have given his men a mighty pep-talk at half-time, as Carnew came out all guns blazing in the second period. At the same time, the intensity levels from Glenealy dropped in the second-half as their momentum was disrupted by a double substitution at the break.

Jack Doyle got an early point for Carnew, before Jonathan O’Neill Jr. got his second goal of the day as Glenealy seemed to be out of sight at 12 points in front. Cian Staunton then pulled off an fantastic save to deny Doyle a goal to hammer that point home.

Not to be deterred, Carnew came roaring back. An Enda Donahoe free and 65′, followed by a terrific Timmy Collins point from wide on the right, reduced the deficit to nine. Donahoe pointed another free before Cian Staunton denied Carnew once again with a good save to deny Wayne Kinsella.

Donahoe pointed the resulting 65′ before a foul on Padraig Doran gifted Carnew with another chance to score their first goal from the penalty spot. While he may have mishit the first penalty, Donahoe made no mistake with his second opportunity, smashing his shot into the left-hand corner to reduce the deficit to four points at 3-07 to 1-09.

This new found intensity continued as the game approached the final 10 minutes, with yet another Enda Donahoe free — following miscommunication between Staunton and Warren Kavangh resulting in the latter putting the ball over his own bar — reducing the deficit to just two points, a score which sent the Carnew faithful into bedlam.

However, while they managed to score eight points in the second-half up to that point. more than twice what they managed over the entirety of the first-half, any attempts to find the back of the net were met with resistance from a stellar Glenealy rearguard, specifically Danny Staunton and the tremendous Warren Kavanagh. When they did manage to get past Gary Laffan’s side’s solid defence, they were obstructed by the fantastic Cian Staunton, who was the star of the show despite Gleanealy’s ruthless finishing at the other end.

Despite the dogged comeback from Carnew, Glenealy demonstrated the stuff of champions to rebuild their advantage. Jonathan O’Neill Jr. and Snr. both split the posts to extend their lead back to four, before half-time substitute Gary Hughes managed to hook a beautiful strike over the bar with his back to goal.

Yet another Enda Donahoe point pulled that lead back to four, before Glenealy’s other half-time sub Leighton Glynn made sure of the win with a wonderfully taken goal which saw the ball fly past Ted Kennedy into the left-hand corner.

The final stages of the game threatened to take an ugly turn, as captain Wayne Kinsella was given a straight red card to reduce Carnew to 14 men. However, that moment of needless aggression was but an outlier in an excellent hurling final, as Glenealy retained the senior championship — something they had not managed since 2013 — while Carnew’s search for a senior title will be extended to 10 years.