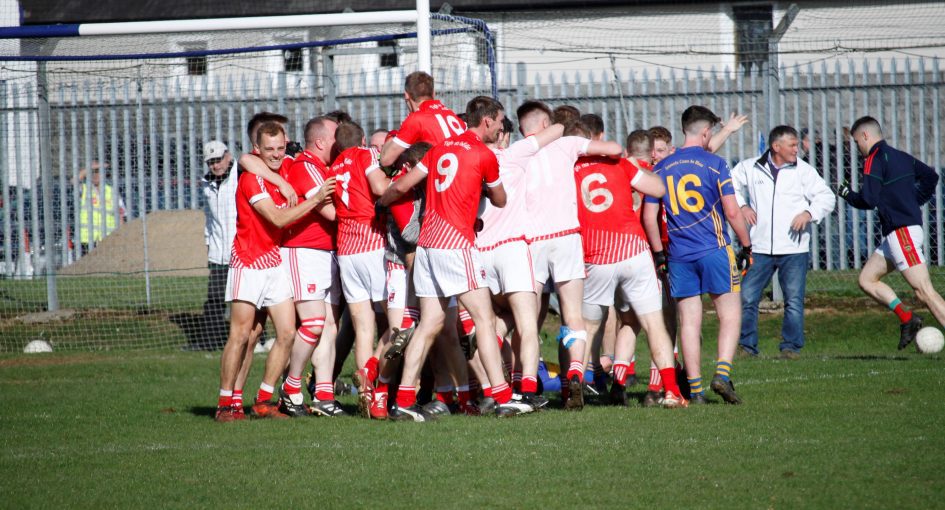 Tinahely went into the game, and the championship campaign, as favourites after being relegated from the SFC in 2017 alongside Coolkenno — who were knocked out of the IFC by Carnew in the quarter-finals.

In a game low on scores but high on physicality befitting of a game between two local rivals, Tinahely showed why they were tipped to win when Stephen Dillon toe-poked home for a goal inside just 40 seconds.

Tinahely dominated the early exchanges but were wasteful when presented with chances, as they registered four wides before Carnew finally managed to score through a John Kavanagh free after 11 minutes.

That was cancelled out by a point from Stephen Dillon after a terrific ball over the top from Jason Cush. That would be the last score of the half until additional-time, as both sides were unable to build on their tallies. Brian Walsh (Tinahely) and John Kavanagh (Carnew) both had shots drop into the respective goalkeepers’ arms.

At the same time, the aggression in the game intensified to a fault, as Enda Donohue (Carnew) and Alan Dillon (Tinahely) both booked in the closing stages of the half, with the latter lucky not to see red for a high tackle.

Finally, with the game going into the first of two minutes added time at the end of the first period, Alan Dillon pushed the Tinahely lead out to four, before Brian Walsh extended that to five. John Kavanagh pointed for Carnew as Tinahely took a deserved 1-03 to 0-02 lead into the break.

Carnew made the better start to the second-half. John Doyle split the posts before John Kavanagh scored from another free to reduce the gap to two points after two minutes of the second period.

Tinahely were almost made to suffer more early second-half misfortune as Stephen Dillon was booked for a high tackle when, much like Alan Dillon, he was perhaps fortunate not to see red.

Despite this early hiccup, Tinahely managed to rebound through a Tony Darcy point before Stephen Dillon was denied another Tinahely goal by a great save low to the right by Carnew goalkeeper Cormac Doyle.

This didn’t stop Tinahely from building on their lead through a Jason Cush free, which was followed by a Conall McCrea point for Carnew. John Kavanagh then had a shot cleared off the line as Carnew turned up the heat on the Tinahely goal.

Carnew’s sloppiness continued to cost them, as John Kavanagh put a pair of frees wide, followed by John Doyle missing another point chance for Emmets.

Then, 16 minutes after McCrea’s point, the outstanding Brian Walsh scored a massive point for Tinahely to extend their lead to four points with just a minute left of regulation time. Unfortunately for Tinahely, five minutes additional time meant that the game was ready for one last twist.

That twist seemed imminent after substitute Joe Hughes pointed for Carnew to close the gap to three points. Then, a Tinahely wide with 60 seconds left set the stage for a grand-stand finish.

John Kavanagh struck towards goal, only for that shot to be bravely blocked down. Gathering the ball off the block, Conall McCrea twisted and turned for space for a strike of his own, only for his resulting looped hit to be comfortably palmed away by Tinahely stopper Alan Nolan.