Bray resident to appear on Tastes Like Home with Catherine Fulvio 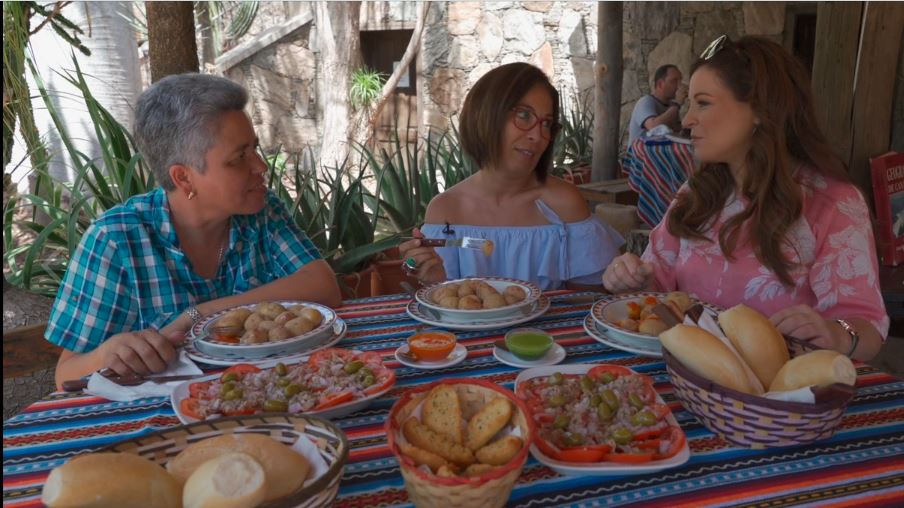 Bray resident Nikki Preston-Doyle hits the spotlight in episode four of the third series of Tastes Like Home, which will air on RTE ONE tonight at 19:30pm  where she teaches well-loved Chef Catherine Fulvio, how to make pork fillet stuffed with prunes served with mustard mash and minty vegetables. The dish is a favourite of Nikki’s sister Jill Preston-Doyle, who has been living in Gran Canaria for the past 20 years with her daughter Carolina.

The show opens with Catherine spending time with Nikki in Bray before the Tastes Like Home team take to the skies and travel to Gran Canaria, to spend time with Jill and re-create Nikki’s much-loved recipe from home plus Catherine will serve up one of her special dishes, sticky banana date pudding with a rum caramel sauce.

Gran Canaria is one of Spain’s Canary Islands, off northwestern Africa with a population of just 847,830. Known for its black lava and white sand beaches. Gran Canaria’s southern beaches include bustling Playa del Inglés and Puerto Rico as well as quieter Puerto de Mogán and San Agustín.  The island’s interior is rural and mountainous.

Catherine said of her time in Gran Canaria,“ I discovered that potatoes appear to be loved by all in Gran Canaria, I particularly enjoyed their “wrinkly potatoes”, a thin skinned potatoe, traditionally cooked in sea water which gives them their wrinkly effect. I enjoyed learning ‘Spanglish’ which came about when locals misunderstood what was printed on packaging. A great example being ‘Otudates’, a favourite potato actually got its name from a misunderstanding from notes on the seedling potato boxes stating “out of date – you couldn’t make it up!”.

“I found the Arehucas distillery (rum) to be very unique – not just because of the pink rum (yum!) but also because of the signed barrels – some had sketches on them by famous artists – I happened upon a pair – one signed by Tom Jones and the other by Julio Inglesis – which would have made my mother exceedingly happy had she been there!” Catherine continued.

Jill lives in Tauro valley in Anfi Tauro an idyllic place with a climate of eternal sunshine. Cocooned between majestic mountains the championship golf course (Anfi Tauro Golf Course) gently rolls down towards the crystalline Atlantic Ocean, providing you with a perfect location for your dream holidays and in Nikki’s case a fabulous back drop to her life.

Culturally, viewers are treated to a tour of the many culinary and cultural delights as Catherine takes a tour of a rum distillery (Arehucas Rum Distillery) that is over 100 years old. She learns all about Gofio a roasted cereal flour at a local mill, Gofio is one of the most ancestral foods of the Canary Islands since its origin goes back back hundreds of years ago. She also visits a local restaurant to sample some of Gran Canaria’s best local cuisine, and visits the biggest Cactus Park in Europe with cacti measuring over several meters high followed by a trip to the only Coffee Plantation in Europe.

Nikki said of the Taste Like Home experience, “I have to say that this was a great experience from start to finish, I really did not know what to expect but got great joy and satisfaction from it all.  It made me go outside my normal comfort zone, which I thoroughly enjoyed and was surprised at how comfortable I felt.  The crew were a delight to work with, so easy going and nothing was too much trouble, everyone (dinner guests included) felt at ease.  Definitely something I would love to do again .”

Whilst sister Jill said, “When my sister Nikki suggested that we participate in Tastes Like Home I agreed for two reasons, one was that I wanted Irish people to see another side to the place where I live, Gran Canaria, and the other was it sounded like fun! It was just that, I thoroughly enjoyed the whole experience with Catherine and the team and am confident that we did succeed in showing other aspects of life on this lovely island. “

The popular TV series returns for six consecutive weeks, this November, and into December promising a serving of delicious recipes steeped in tradition and a flavour of incredible culture and sights from locations right across the world. As well as delighting viewers with recipes, culture and captive travel, the series captures eight individual stories, from Irish contestants who refuse to let the physical distance from home, curb their appetite for a home-cooked meal, a taste of home.

“The Irish are no strangers to the emotional relationship between food and family, and it’s this local connection that inspires our commitment to the sponsorship of the show year on year,” said Londis Sales Director, Conor Hayes. “We are delighted to be partnering with Catherine Fulvio and RTÉ for a third year on this TV series, bringing homely recipes to Irish families around the world. Much like Londis, Catherine values quality, local produce and bringing fresh contemporary ideas to the table, so it’s a perfect match for us to partner with”.