Former local referee honoured with Person of the Year award 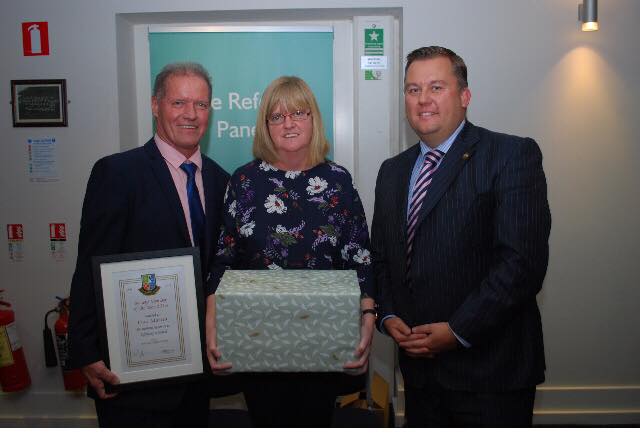 271
SHARES
ShareTweetSubscribe to our Newsletter

Fran Martin has been awarded with the Irish Soccer Referees Society Member of the Year Award for 2018.

The Newtown-native was being celebrated for his 42-year refereeing career, during which he joined the Wicklow branch of the Irish Soccer Referees Society.

In a statement, the ISRS said that Martin was being honoured for his “many contributions that he has made to the Wicklow branch of the Irish Soccer Referees Society and to society as a whole.

“Fran’s steadfast belief in the ISRS has never wained throughout the years and, in fact, has only strengthen over the years, Fran has always believed that every referee in the country that is really interested in refereeing should be in the ISRS and he has encouraged every referee he has come into contact with to join it,” the statement read.

Fran served as chairman of the Wicklow branch for over twenty-five years, during which the branch had over 50 members — the vast bulk of which being grade one.

Despite having hung up his whistle a number of years ago, Fran has remained an active and loyal member of the ISRS, remaining as council rep for the Wicklow branch. His most recent involvement was representing the society council at the FAI’s Agm in Cork, despite being diagnosed with an illness a few weeks before hand.