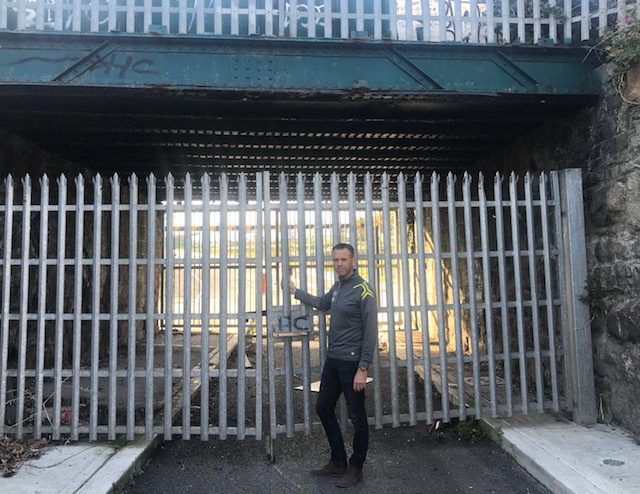 Wicklow Sinn Féin TD John Brady has called on Irish Rail to immediately reopen public access from the Bray Harbour area to the new Coláiste Ráithín and Ravenswell schools that are located on the old Bray Golf Clubs lands.

Teachta Brady said “Access to the new Coláiste Ráithín and Ravenswell schools from the Bray harbour area for pupils is a critical part of the overall plans that were approved for the construction of the schools. Irish Rail need to immediately remove a palisade they erected  blocking the access under the railway line to allow students and teachers get to school.”

“There has always been public access under the railway line at this location. It was temporarily blocked off during construction of the Dargle flood protection scheme, with the intention of having it reopened. Having access to the new schools from this location was a critical part of the planning permission that was granted for the Coláiste Ráithín and Ravenswell schools. Provision was made for pedestrian and bicycles along with restricted vehicular access. This was deemed necessary to alleviate any potential traffic problems on the Dublin Road due to the relocation of the two schools.”

Teachta Brady continued “Unfortunately when access at this location was temporarily restricted to the public during construction of the schools, Irish Rail erected a palisade fence across the newly constructed footpaths and roadway. Students who could use this entrance have to make a long detour to get to the schools on the old golf club lands. It’s also estimated up to 70 students could be dropped off to the harbour area to walk from there to school if the access was open. This would result in up to 70 less cars using an already busy Dublin Road.”

“I have been in contact with Irish Rail, the National Transport Authority (NTA) and Wicklow County Council on this issue over the last few weeks with a view of having this issue resolved. Whilst Irish Rail needs to ensure that the railway line is protected, I believe that the measures that have been put in place in the area are more than adequate to ensure that this is the case. The current situation is crazy, a new roadway along with footpaths and cycle lanes have been constructed on both sides of the fence which was erected by Irish Rail. They need to remove the fence and open the critical artery to the schools immediately.”