Late penalty drama as Glenealy knocked out of Leinster championship 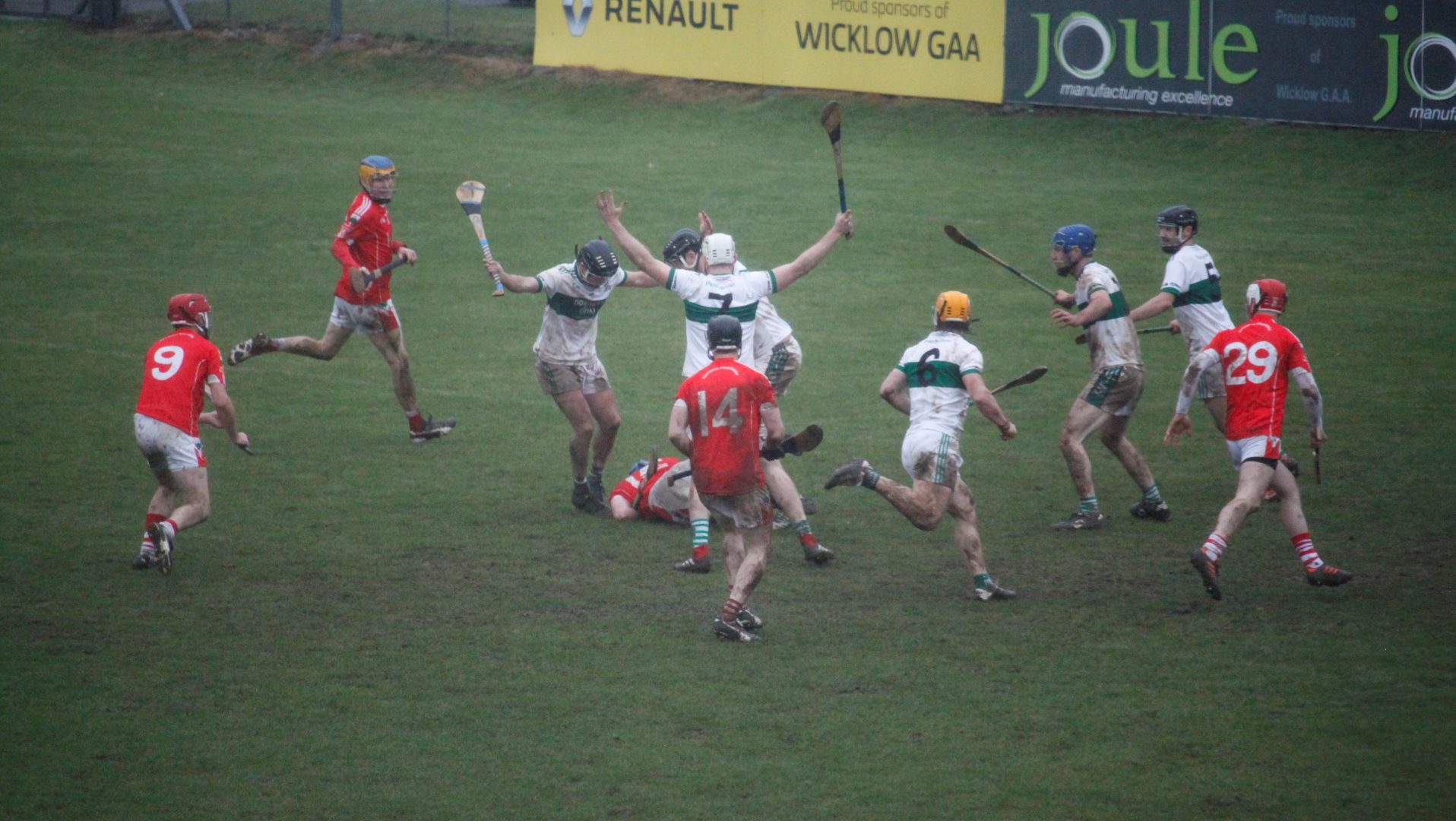 It was a tale of two penalties as Glenealy were knocked out of the Leinster Intermediate Hurling Championship following a dramatic 1-10 to 0-16 defeat to Portlaoise on Saturday.

Full-back Danny Staunton scored one penalty and had another saved in the second-half as a superior Portlaoise side, inspired by Tommy Fitzgerald and Cian Taylor, advanced to the Leinster semi-finals following a brave late Glenealy comeback.

Sweeping rain and swirling winds did not set this Joule Park encounter up to be a classic, as the turf underneath both sets of players’ shifted and kicked up throughout the runtime. Glenealy were the first to stamp their authority on the game through a point and free from Jonathan O’Neill Snr., but it was Portlaoise who adapted to the miserable conditions better.

A pair of points from Dean Lynch levelled matters inside just nine minutes, before Portlaoise were awarded a penalty. Fortunately for Garry Laffan’s side, Cian Staunton — who put in a man-of-the-match performance in the county final — saved Colm Gleeson’s mishit strike.

Glenealy did manage to find themselves in front once again after 18 minutes through another O’Neill free, but that would prove to be the last time Glenealy would find themselves ahead in the game as Portlaoise quickly took over.

A Cian Taylor point from range levelled proceedings going into the final 10 minutes of the first-half, before Cahir Healy pointed from his own half to put the visitors in front. Another great point, this time from the excellent Tommy Fitzgerald extended the gap to two points, before further points from Taylor and Cormac Rigney (free) put them further in front.

The introductions of Leighton Glynn and Thomas Doyle did little to help Glenealy’s fortunes as Laffan’s side struggled to come to grips with a Portlaoise side utilising the full width of the park. Cian Taylor took advantage of Warren Kavanagh missing a high-ball to point for Portlaoise, a score which Glenealy could only answer with wides from Robert Byrne and Jonathan O’Neill Snr.

There were no such problems for Dean Lynch, who pointed to extend Portlaoise’s lead to five points, before captain Fitzgerald got the final score of the half on the stroke of half-time to send his side into the break with a 0-11 to 0-05 lead.

Despite Glenealy having the winds at their back in the second period, it was Portlaoise who continued their first-half performance into the second. Cormac Rigney took a free short to set up Gary Bergin, who pointed inside the first 60 seconds to make the score 0-12 to 0-05.

O’Neill put another free wide for Glenealy, before Cathal Duggan extended Portlaoise’s lead to eight. Another Fitzgerald point was sandwiched between Glenealy’s first scores of the second-half through a pair of O’Neill frees. Laffan’s men then got their first of several goal chances when a Leighton Glynn sideline cut on 45 minutes caused a skirmish in the Portlaoise square, only for the defence managing to sweep the ball away.

Cathal Duggan pointed again for Portlaoise to restore their eight-point lead, before Staunton once again denied the visitors a goal after he saved a Rigney shot following good build-up play from Cian Taylor.

The game broke down going into the final 12 minutes, as Glenealy looked to fight their way to an unlikely comeback. A controversial free, which was pointed by Portlaoise’s Cormac Rigney, led to the bookings of Warren Kavanagh and Jonathan O’Neill Snr. for dissent.

It was made worse when substitute Wayne O’Gorman appeared to be hauled down for a possible penalty, only for referee Seán Stack to wave away the claims before showing Leighton Glynn a yellow card for his protests.

While Glenealy’s lack of discipline towards the officiating represented an unfortunate spell in the game, the increased aggression and intensity set-up what would prove to be a truly remarkable final 10 minutes — defined by two massive penalties.

First, with seven minutes left on the clock and three minutes after their initial penalty claim was waved away, Gavin Weir was brought down for another shout. This time, Stack awarded the penalty, which Staunton clinically stuck away into Portlaoise stopper Eoghan Nealon’s bottom left-hand corner. With 23 minutes on the clock, the scores were set at 1-07 to 0-16.

The final five minutes were dominated by a Glenealy side buoyed by the increasingly prominent Leighton Glynn and Jonathan O’Neill Snr., as well as having Wayne O’Gorman as a target to drop the ball into.

O’Neill pointed a pair of frees to reduce Portlaoise’s lead to four points, before Gavin Weir split the posts to reduce the gap to a minimum as the game ticked over into four minutes of added time.

Glenealy continued to pile forward, and were awarded two minutes into injury-time when the largely anonymous Alan Driver was brought down in the Portlaoise area by Chris Lynch. Stack promptly sent Lynch off, and Danny Staunton set the ball on the spot with the chance to send the game to extra-time.

However, while the first penalty was hit hard and low into the keeper’s left-hand post, Staunton’s second one was struck high to the keeper’s wide, allowing him to stick out his hurl and swat the ball away.

Glenealy continued to pile forward as the final two additional minutes ticked over, but to no avail as Portlaoise kept Laffan’s brave and stubborn side at bay to progress to the semi-finals of the Leinster Intermediate Club Hurling Championship.