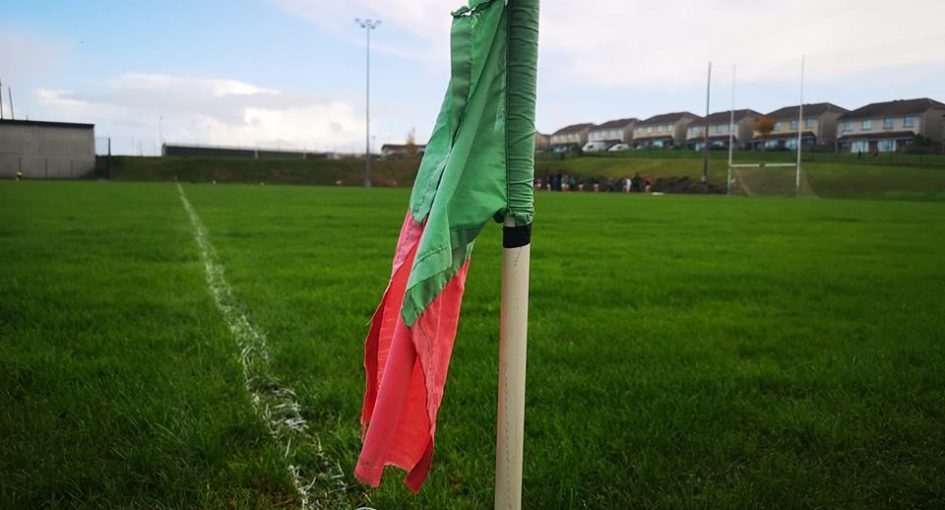 Rathnew produced a remarkable second-half comeback to end their U20 football championship on a high with a dramatic win over St. Nicholas’ on a rain-soaked Sunday afternoon.

Peter Dignam’s side made hard work of the game, going into the half-time interval 0-08 to 0-02 down to the amalgamated Dunlavin/Donard Glen side. However, a remarkable second-half display — bolstered by tremendous performances from Sam O’Dowd and Gary Hughes — saw Rathnew turn the game around, with a Dylan Smith goal and an own goal proving too much for St. Nicholas’ to overcome.

Much like the rain clouds that hung overhead, Rathnew were slow to open up against St. Nicholas’, as Dignam’s men struggled to gain a foothold on proceedings. There were no such problems for the visitors, as points from James Eastor and Paddy Kelly gave St. Nick’s a two point to no score lead inside the first five minutes.

Ciarán Coffey finally got Rathnew’s first score of the game from a free, before Kelly and the outstanding Brian Nolan put the visitors into a three point lead.

Despite reducing the deficit to two points through a Dylan Smith free, the hosts were being outclassed by an impressive St. Nick’s side. Brian Nolan, in particular, was dictating proceedings in the half-forward line, while Seán Brannigan was occupying Ciarán Coffey in midfield.

Nolan pushed the game out to three points with nine minutes left in the first-half. Soon after, he rose highest to claim a kick-out in midfield, before instigating the move which resulted in Paddy Kelly splitting the posts to make it 0-07 to 0-02.

Kelly then capped off the first-half proceedings with the score of the game from wide on the left, bending a cracker of a strike with his left-foot wide on the left-side of the pitch over the Paddy Reynolds bar to send the visitors into the dressing room with a 0-08 to 0-02 lead.

Those dark clouds finally gave way to heavy rain and swirling winds as the first-half came to a close and continued all through the break. The tension break in the weather was echoed by an intensity and ruthlessness that Rathnew exhibited to turn the game around in the second period.

Quick-fire scores from the reinvigorated Sam O’Dowd, as well as a well-worked score from Jensen O’Connor off of good combination play between Tristan O’Toole, Jack Healy, and the industrious Gary Hughes, reduced the gap to just three points.

Tomas Lawlor then had a strike saved on the line by a Rathnew defender, before the Village went up the other end to to make the gap just two points through Dylan Smith. That was reduced to one with a long-range score from JT Moorehouse, before Mark Reid got St. Nicholas’ first score of the half with a well-taken point wide on the right with 41 minutes on the clock.

The game was finely poised for a moment of heroics or, in the case of the first goal, terrible luck. Ciarán Coffey, who began to grab more of a hold on proceedings in the second-half, struck a 45′ which St. Nick’s stopperTom McGuirk pushed onto the bar. Unfortunately for the visitors, the ball merely came back off the bar and hit the back of one of the St. Nick’s defenders before nestling in the back of the net to give Rathnew the lead for the first time.

Rathnew almost doubled their goal tally when substitute Seán Coffey set up Dylan Smith for a pop at McGuirk’s nets, only for the St. Nick’s keeper to deny him. Not to be deterred, Dignam’s men did extend their lead to two through Jensen O’Connor following another Ciarán Coffey troublesome 45′.

M.J. Moran and Mark Reid brought St. Nick’s level before the visitors netted their first goal of the afternoon in similarly bizarre circumstances as the earlier own goal.

Stephen Doyle did well to fashion space on the right-side of the Rathnew square, only to see his effort saved by Paddy Reynolds. However, the attempted clearance from the Rathnew defence proved disastrous; hitting Brian Nolan and nestling into the corner of the goal to set-up a grand-stand final five minutes with St. Nick’s a goal up at 1-11 to 1-08.

The game took yet another turn shortly after through Rathnew’s second goal of the half, this time in far more traditional fashion.

Sam O’Dowd — who demonstrated difference-making creativity and incisiveness in the second-half — lofted a teasing ball from wide on the left hand-side. The ball ended up in the grasp of Dylan Smith, who made no mistake in putting the ball past McGuirk and bringing the sides level with just short of three minutes left on the clock.

Sensing blood in the water coating the pitch, Rathnew kicked on from there; taking the lead through a Ciarán Coffey free before Coffey sealed the deal with, fittingly, a 45′