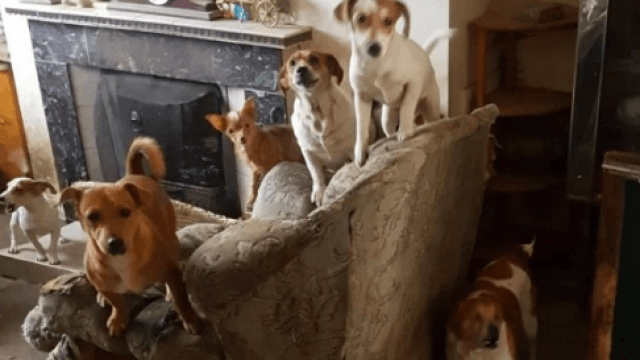 166
SHARES
ShareTweetSubscribe to our Newsletter

A Wicklow man made a desperate call to ASH Animal Rescue earlier this week when he realised he could no longer afford to keep dogs he had rescued.

The man had started to take in strays, abandoned and unwanted dogs a number of years ago.

A spokesperson from ASH said “He looked after the dogs to the best of his ability, but the situation got out of hand as the number of animals increased .”

Last Monday the man became overwhelmed when he realised he could no longer afford to keep his large growing amount of dogs.

ASH immediately visited the home of the man where they found 70 dogs and began transporting to their centre close to Rathdangan, some were heavily pregnant and 5 pups have been born since last Tuesday .

Helena and Remi Le Mahieu who run ASH said ” This gentleman out of the kindness in his heart, a few years ago began to take in stray, sick, dumped and unwanted dogs and did his best to care for them. Over time his numbers increased, so too did the cost of looking after them and he was no longer able to afford to get them neutered, vaccinated etc. He got to the point where he struggled to afford to feed them and his call to us was a cry for help for the sake of his animals, we know some people won’t understand this situation, but the man in question genuinely did his best for his animals.

Before the animals are rehomed, many still need to be spayed, neutered, microchipped, and treated for fleas.”

A gofundme page has been set up, if you wish to donate visit ASH Gofundme here 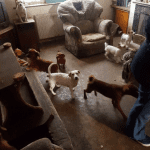