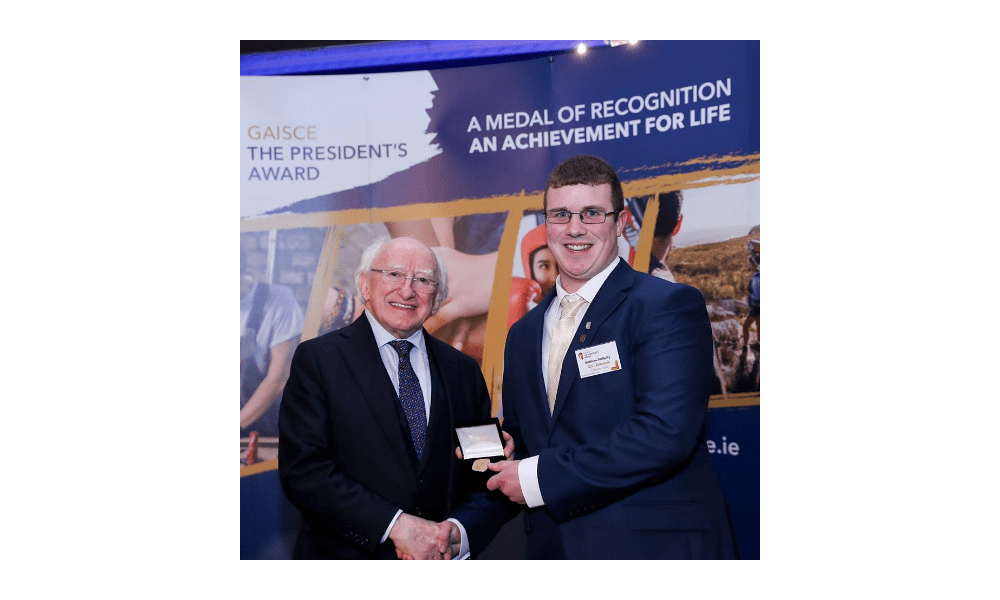 Wicklow student Matthew McNulty was last week recognized for his tremendous efforts as a member of Gaisce when he received his Gold Gaisce Award, the highest award in the organization, at a ceremony in Dublin Castle.

78 others were honoured at the event last Monday which was presented by president Michael D. Higgins and is already being called the largest Gold Gaisce Award ceremony in 30 years.

In order to receive the award, candidates must first complete an award portfolio which sees them undertake challenges that include tasks involving community involvement, personal skill, physical recreation, adventure journeys, and residential projects.

Matthew trained with his local soccer team, walked the entirety of the Wicklow Way trail, completed a week’s residential programme at Barretstown, and took part in the student council at both his college and during his time at Coláiste Chill Mhantáin- and all of this combined earned him the Gold Award.

Matthew said “It means a lot to me personally winning this award as it took so much effort and determination. I had to put myself into situations where I was totally out of my comfort zone.

“I have been involved with Gaisce since Transition Year in 2015. I started with the Bronze award which I enjoyed so much that I wanted to undertake the silver award as a even bigger challenge. Then when I was at the silver award ceremony I swore to myself that I would one day get the Gold Gaisce award.”

But Matthew insists that his work isn’t finished and, as an active member and leader in Gaisce, is encouraging young people to get involved.

“I highly encourage all students in TY and over to get involved with Gaisce, it is a life-changing experience and will help you all with so many things further on in life.

“I am a Gaisce Presidents Award Leader myself so if anyone who is between the ages of 18 – 25 who want to undertake the Bronze, Silver or Gold Gaisce Award send me an email at ‘wicklowgaisceclub@gmail.com'”

Gaisce has been recognizing the achievements of young people in Ireland since 1985, and over 300,000 young people have participated since its establishment.