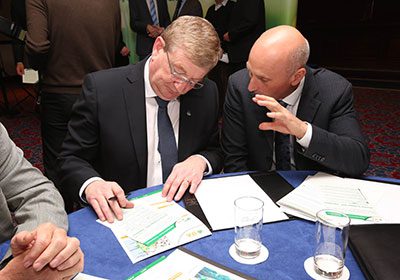 Wicklow Fianna Fail TD Pat Casey says he is deeply concerned by the lack of urgency in which the Government is activating contingency plans to protect exposed businesses in Wicklow from a hard Brexit.

According to Casey, a series of parliamentary question replies reveal that the Government has yet to formally make a request at EU level for changes to be made to State aid ceilings to protect Wicklow enterprises and exporting companies from a no-deal Brexit scenario.

In a release to the press, Casey said “The March 29 deadline is fast approaching and I am very concerned that the Government does not appear to realise how urgently contingency plans are needed. While Minister Heather Humphreys talks about a Technical Working Group on State aid being established between her department, Enterprise Ireland, the Department of Agriculture and DG Competition, this body is only examining Brexit support schemes within current State aid rules.”

The Fianna Fail TD stressed that the government have yet to make an application to the EU under Article 107 of the EU Treaties, which could lead to a disturbance to the Wicklow economy in the event of a no-deal Brexit.

“The Government appears to have made no application to the EU to change the State aid ceilings, as it is entitled to do so under Article 107 of the EU Treaties, which empowers the Commission to declare State aid compatible with the common market ‘to remedy a serious disturbance in the economy of a Member State’.”

“If this article was invoked, the Government would be able to introduce a higher level of grant aid for support schemes to vulnerable export businesses in exposed sectors in Wicklow such as agri-business. Given that we are facing the real prospect of a no-deal Brexit, this represents a colossal disturbance to the Wicklow economy.”

Casey concluded by emphasising that even at this late stage, an application to the EU would make a huge difference to small and medium businesses in Wicklow that need to secure support to protect them from a hard Brexit.