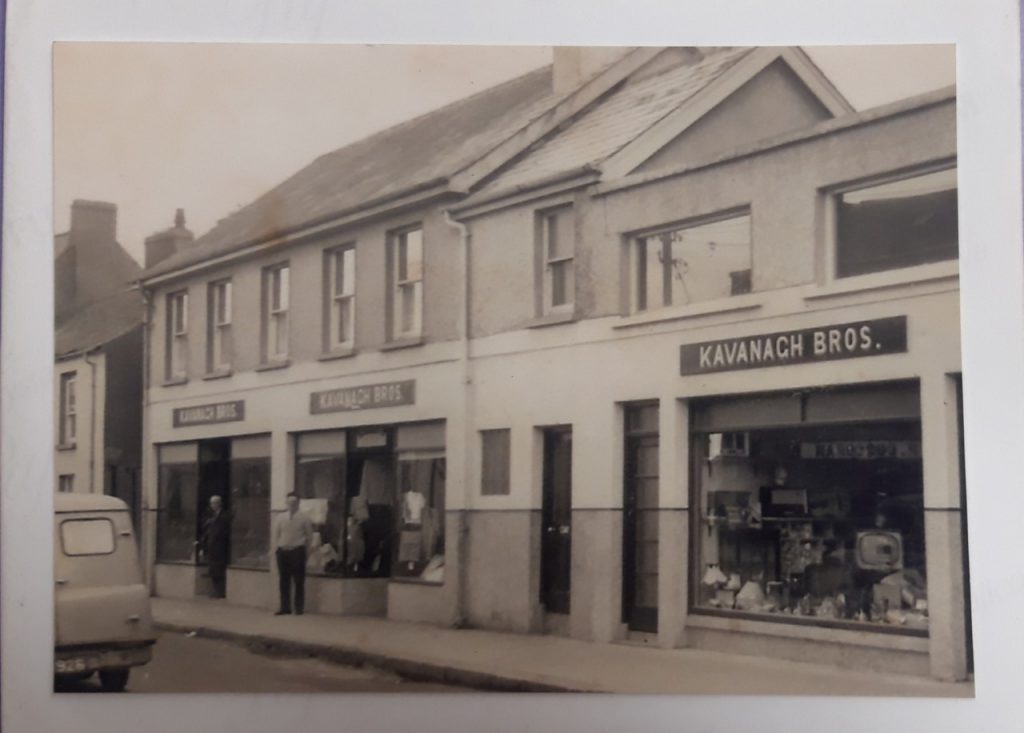 Wings & things is a tiny little eclectic gift shop on the Main street of Wicklow Town. It was opened in May 2013 by the late Cllr Pat Kavanagh and her daughter Derval. The shop unit, along with what is now Boyz2men, was a well known clothes & shoe shop in the town run by the late Tom & Philomena Kavanagh. Stories of their generosity and empathy towards others still come through the door to this day.

Wings Angel & Crystal Shop and therapy room was an aspiration by Pat to have a safe and welcoming space for people to visit. She wanted a place where you could explore your spirituality or maybe just satisfy your curiosity. Somewhere you could find that meaningful gift. 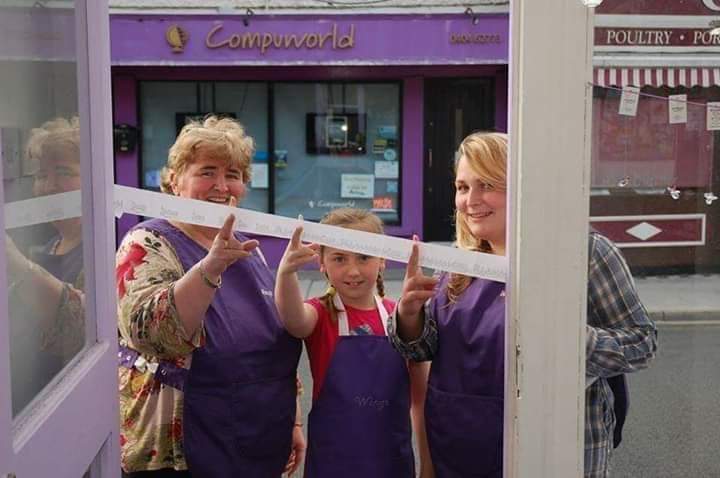 In Dec 2015 Pat sadly passed away after a courageously fought battle with cancer. At the time of her passing she ran The Cave Pre-School on High Street, Wings Angel and Crystal shop and held her seat as an Independent Councillor on Wicklow Municipal District Council. In an effort to keep Pat’s memory alive her family and friends took over her various ventures as best they could. Her niece Claire Fitzgerald now runs the Cave Pre-school. Her sister Mary Kavanagh was co-opted to her Council seat and her friend Tara Crawford took over Wings.

Wings reopened in March 2016. Wings is known in the town as having an eclectic mix of gifts. You can hear the chimes outside and smell the incense on approach. As you come in the door you will see the magic wishing chair. This is a firm favorite with people of all ages and belief systems. Tara says “I have people who travel to make a wish on the chair! It’s heartwarming that people can take comfort and positivity from something so simple.

There’s also a Blessings Box on the counter. People write down their intentions, their wishes or their prayers, whatever their belief system is, and put it into the box. Many different therapists share the space in Wings and all include the intentions in the box in their thoughts. It is a small gesture that is completely confidential and it does no harm. Pat’s ethic would have been to ‘do no harm’.”

Most people when asked don’t actually know the name of the shop. The shop is referred to in many different guises. It’s mostly referred to as The Angel shop. It has been called the hippy shop, the holy shop and the purple shop. This is exactly what it was meant to be. A small shop that is whatever it needs to be to different people. I have customers who travel from Meath, Kildare, Carlow, Wexford just to be in the space. That in itself is an honour.

“I’m always one for looking for signs that loved ones who have passed are near. Whether it be feathers, robins or rainbows. One Sunday night in Sept 2016 the shop sign that Pat had put up when first opening came down. It peeled off the shop front like a tin can would. It wasn’t a windy night at all but it came down somehow and had to be removed. A few hours earlier I had just recieved the news that my Mum, Anne, had cancer. I was shook to my core to be honest. It felt even more sinister with the shop being damaged too. Who was trying to tell me what? Mum was far from being into ‘spirituality’ or religion. She would tell me I was “cracked” talking about chakras and energy. While Mum was in hospital we came up with a new sign together. 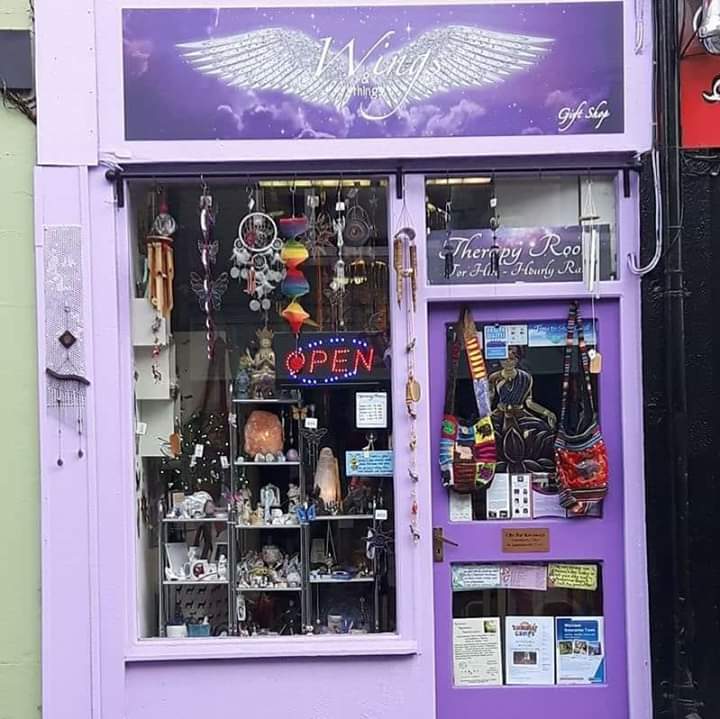 Within 4 weeks Mum passed away. I really didn’t know if I was meant to carry on in the business at all. I started to question everything. The customers that came through the doors in those few weeks after my Mums passing gave me the determination and strength to know Wings should be kept open. There seemed to always be someone worse off than you. I went back to the chats myself and Mum had about the shop and the sign we drew and decided that the shop would now be called Wings & things. It seemed to reflect the array of different stock better. It also included both of the most wonderful women in my life in the business.

People quite often turn up in Wings and things when they want to find that gift that words can’t seem to string together. Quite often grief and loss are the emotion that come in the door. The stock of sentiments, angels, fairies, butterflies, robins, rainbow making crystals and relaxing scents have warmed hearts and given comfort.

Children with separation anxieties and sleep issues often call in for a dreamcatcher or a crystal to help them sleep. Every single day someone would call in with an issue that they needed help with. “I’ve always had an interest in mental health. I worked in Merchants Quay Ireland in the Homeless services for many years. I did my thesis on mental health and Homelessness. I was very aware that it is a fine line between being able to cope and feeling like you just can’t go on. As a result of my time there and the Franciscans holistic ethos I studied Reiki, Crystal Therapy, Bach Flowers among other therapies.”

In August 2017 a brand new course was established in Ireland under the directorship and tuition of Elma Murphy and Pippa O Gorman. “Elma was one of my Mums closest friends over the past 40 years. She is one of the countrys top Kinesiologists and had been teaching Systematic Kinesiology for around 20 years.

Herself and Pippa came together and established the new complimentary therapy called BioKinesiology. I never in my wildest dreams could have imagined 2 such fascinating and professional women come together and put such a wealth of pertinent information into a diploma course that can benefit so many different people. I like to think that my Mums passing was a part of the catalyst for this to happen. If not it was certainly my reason for undertaking it.

Even though I was working full time in Wings and struggling to stay open I knew I had to try be one of the first group of students”. In Nov 2018 Tara became one of the first 13 BioKinesiology graduates in Ireland.

BioKinesiology is a therapy where Biochemistry and Kinesiology meet. Muscle testing techniques are used to read the clients body and their needs. Your individual biochemistry is taken into account, infections and toxins are detected and nutritional fixes and lifestyle changes are recommended to help imrove your health. One of the most important aspects of this is to ensure the digestive system is working to its best ability. I was once told “its a fine line between dis-ease and disease.

That would be my motto in my practice now. It is so so true. You seem to attract what you’re most interested in. For me it’s emotions. I love nothing more than seeing someones day brighten up. When someone comes in and says that they feel defeated or that anxiety, stress, worry is crippling them the conversation maybe starts with crystals or angels or chakras or even just about using aromatherapy oils. It almost always turns into a chat about wellbeing.

BioKinesiology can help look outside the box. It taps in to your subconscious to see what will suit you, as an individual, best. One of my favourite treatments is testing for personalised Bach Flower Remedies. The body is phenomenal. In a session your body will pick approximately 5-6 remedies out of 38 and they will always address the most urgent emotion to be rationalized. I have no say on what you pick, I just facilitate your body to choose them of its own accord. It has never not hit the nail on the head. It often narrows down what you need to address first and foremost”

“If I don’t prioritise my qualification I am worried that I will have to close up altogether. I absolutely do not want that to happen. I have never heard a negative comment about Wings & things. I dont think there has ever been a day where I have not wanted to go to work. I know that I am lucky to be able to say that.

Every few Saturdays I have mediums or card readers in. They take appointments by prior arrangement. They are always magic and powerful days in the shop. It is deeply worrying how poor retail is across the board in Wicklow Town. The new Town Team have been trying hard to come up with a plan in how to improve it for customers and retailers alike. They could do with very ounce of support they can get.

Wings & things is on Facebook. Free delivery can be arranged in the Wicklow Town, Rathnew and Ashford areas. The BioKinesiology and Bach Flowers have a separate page, BK Therapies on Facebook. Both operate from the same premises. Call in and say hello or pm the page with any further questions. Tara will answer you promptly and if she can help she will.

PrevPreviousALONE encourage public to check in on older neighbours as yellow weather warning updated
NextWhat should Wicklow Town market as its top 4 destinations?Next