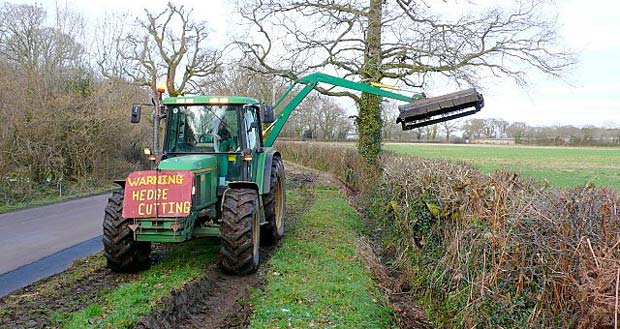 342
SHARES
ShareTweetSubscribe to our Newsletter

BirdWatch Ireland wishes to remind the public, local authorities and contractors that hedge-cutting is NOT permitted between 1st March and 31st August inclusive, except in the case of any of the derogations permitted under the Wildlife Act 1976, as amended. The Heritage Act 2018 gives the Minister for Culture, Heritage and the Gaeltacht the power to make certain changes to these dates, but it is important to note that, as yet, the Minister has not done so. As a result, the usual dates when hedge-cutting is prohibited currently remain unchanged.

Ireland’s hedgerows are unique in a European context and deserve special attention and conservation, especially given that they are so important for nesting birds, other wildlife, people and for stockproofing. In Ireland 68% of our regularly-occurring birds are on the Red and Amber list of Conservation Concern. This includes Red-listed farmland bird species such as the Yellowhammer, which breeds in hedgerows until late into the summer and early autumn. The Red-listed Barn Owl is also known to follow the linear feature of hedgerows when hunting at night. Hedgerows are more important than ever in the Irish landscape, which is becoming ever more intensively farmed.

Hedgerow trees, shrubs and plants act as an important food source for many animal species. Birds depend on the haws, hips and other berries, while bees and butterflies source nectar from flowering shrubs and plants and several mammal species forage on blackberries during the autumn.

Hedgerows also sequester and store carbon and can help with mitigating climate change. It is estimated that 450,000 Ha, or 6.4% of the Irish landscape, is comprised of hedgerow, scrub and non-forest trees.  Data from 17 County Hedgerow Surveys in Ireland indicate that only one third of hedgerows are in a favourable conservation state, leaving potential for greater carbon sequestration & storage potential through an improved quality stock, while at the same time supporting wildlife. EPA research suggests that hedgerows and non-forest woodlands could potentially sequester 0.66–3.3t CO2 per hectare per year . Hedgerows also help farmers by providing shelter for livestock during inclement weather.

A good hedgerow in favourable condition which maximises its potential to help birds and other wildlife has the following characteristics according to the Hedgerow Appraisal System: they would be 2.5-4m high, 2-3m wide, A-shaped and dense, with less than 5% gaps with 8-9 tree or shrub species per 30m strip, and with space for flowers and grasses to grow at the base. Teagasc recommends only cutting hedgerows on rotation every 3 years on farmland.