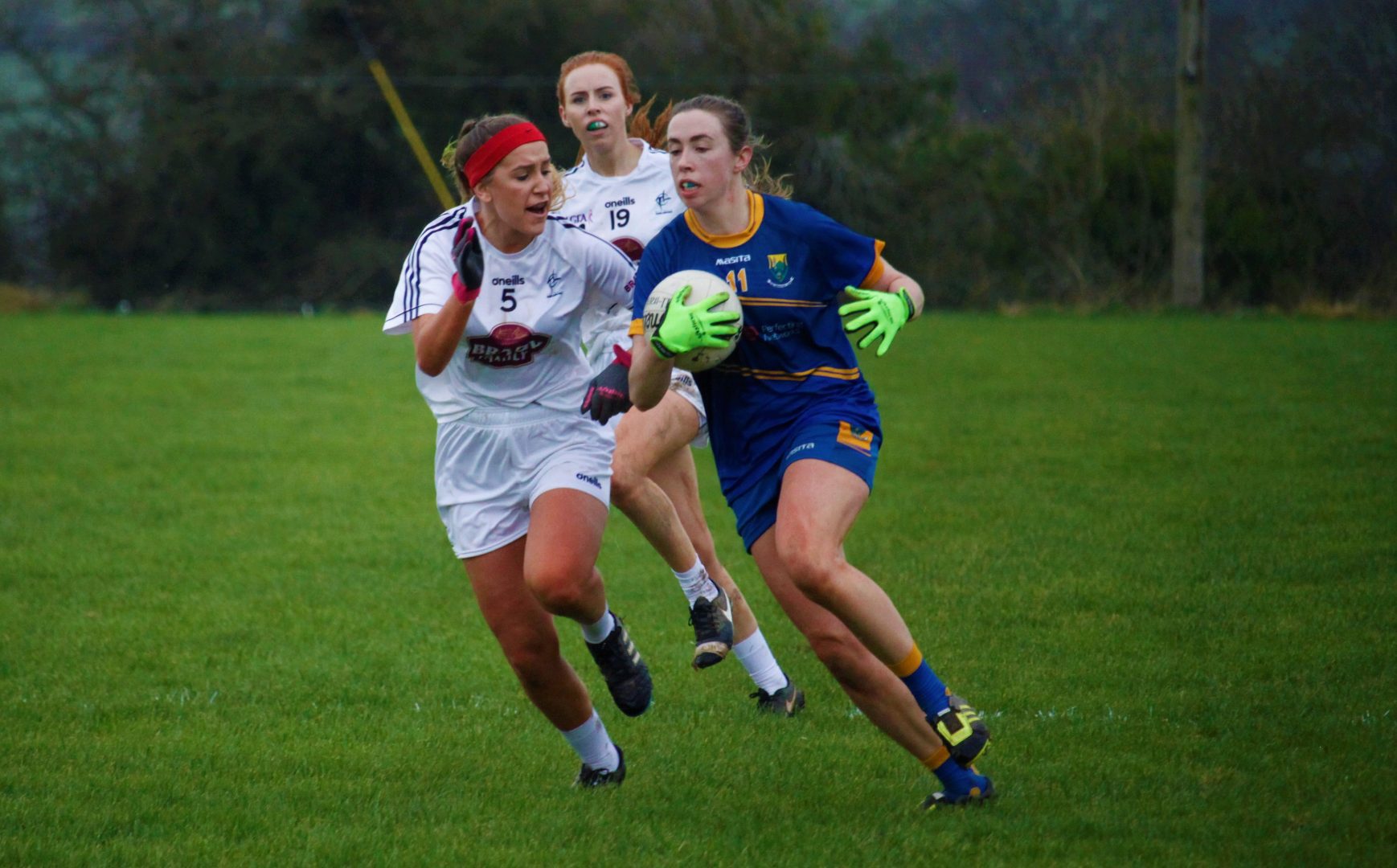 Laura Hogan’s late second goal proved crucial, as Wicklow came away from Dunlavin with a dramatic win over Kildare in a tense affair on Saturday afternoon.

The hosts seemed to have the points wrapped up by half-time, after an early Laurie Ahern goal was followed up by Laura Hogan’s first of the day to give Wicklow an eight-point cushion at the interval.

However, Kildare dragged themselves back into the game in a second-half that saw them reduce the gap to just two points and have a goal disallowed.

Fortunately for James Kelly’s troops, Laura Hogan kept her cool to lob the goalkeeper in injury-time to give Wicklow their second win in three games.

If Wicklow are to challenge for promotion come the end of the league campaign, manager James Kelly may well look back on Saturday’s clash with Kildare as a demonstration of his side’s credentials. While they showed the flair and quality that they are known to boast to beat Down last time out, the victory over Kildare was a lesson in metal.

The game in Dunlavin started the better for the visitors, as Kildare raced into an early three points to no-score lead through Mikaela McKenna (2), and Ciara Wheeler.

However, before the match was four minutes long, Wicklow had turned the game back around through Laurie Ahern’s second goal of the season. Sarah Delahunt gathered possession in midfield, before lifting a delightful ball over the top of the Kildare corner-back into Laurie Ahern, who charged inside before poking the ball past Rebecca McGuirk.

Delahunt followed up that assist with a point of her own to put Wicklow in front, before her quick free was worked into Clodagh Fox, and then Laura Hogan, the latter of whom made no mistake to pop the ball over the bar.

Kildare managed fought tooth-and-nail to reduce the deficit, but found Wicklow in full flow. Minutes after getting her second point of the day, Hogan worked the ball onto Anna McGrath, who was pulled down an awarded the penalty by referee Jonathan Murphy.

While Amy Murphy saw her penalty saved, the resulting 45 resulted in another point as Hogan teed up Laurie Ahern.

Wicklow continued to dominate proceedings, with Amy Murphy and Sarah Delahunt providing service into the channel of the Kildare left corner-back. The pressure finally told four minutes from half-time, when a poor Kildare kick-out was retained by the energetic Evelyn Dean. She, in turn, worked the ball into Laura Hogan, who made no mistake in dispatching the ball into the back of McGuirk’s net, sending Wicklow into half-time with a commanding 206 to 0-04 lead.

The second-half started similar to the first, as Kildare put over a trio of scores from Nessa Dooley, Aoife Rattigan, and Lara Curran. However, while Wicklow quickly exposed a Kildare weakness at the back at this point in the first, the visitors kept the momentum going to give Wicklow a mighty scare as the half wore on.

The pulled the deficit back to within two goals through further scores from Dooley and Rattigan, before — at the other end — Michelle Curley denied Sarah Delahunt a pop at goal.

Wicklow continued to struggle to prise open a stubborn Kildare rearguard, as Lara Gilbert and Curley proved formidable reinforcement down their left-hand side.

As the game ticked over into the final 12 minutes, Sarah Munnelly reduced Wicklow’s lead to just three points, a Grace Clifford strike was saved over the bar by Kim Connors. Laura Hogan restored Wicklow’s one-goal lead going into the final 10 minutes as the tension on the field escalated.

Matters got worse for the Garden when substitute Meadbh Deeney and captain Niamh McGettigan were both sin-binned. Despite the numerical disadvantage, Wicklow remained firm at the back, as the likes of Sarah Hogan, Lorna Fusciardi Hayden, and Aoife Gillen prevented Kildare from getting that vital goal.

Controversy reigned with 59 minutes on the clock, when Nessa Dooley shaped past the Wicklow defence and fired the ball into the back of the net to equalise. Unfortunately, the referee blew the whistle to penalise the Kildare forward for travelling.

That was as close to getting a goal as Kildare would get, while Wicklow went up the other end deep into additional time to wrap the game up.

Another poor Kildare kick-out was collected by Laura Hogan, who composed herself to lift the ball over the on-rushing goalkeeper to seal a priceless three points for the hosts.