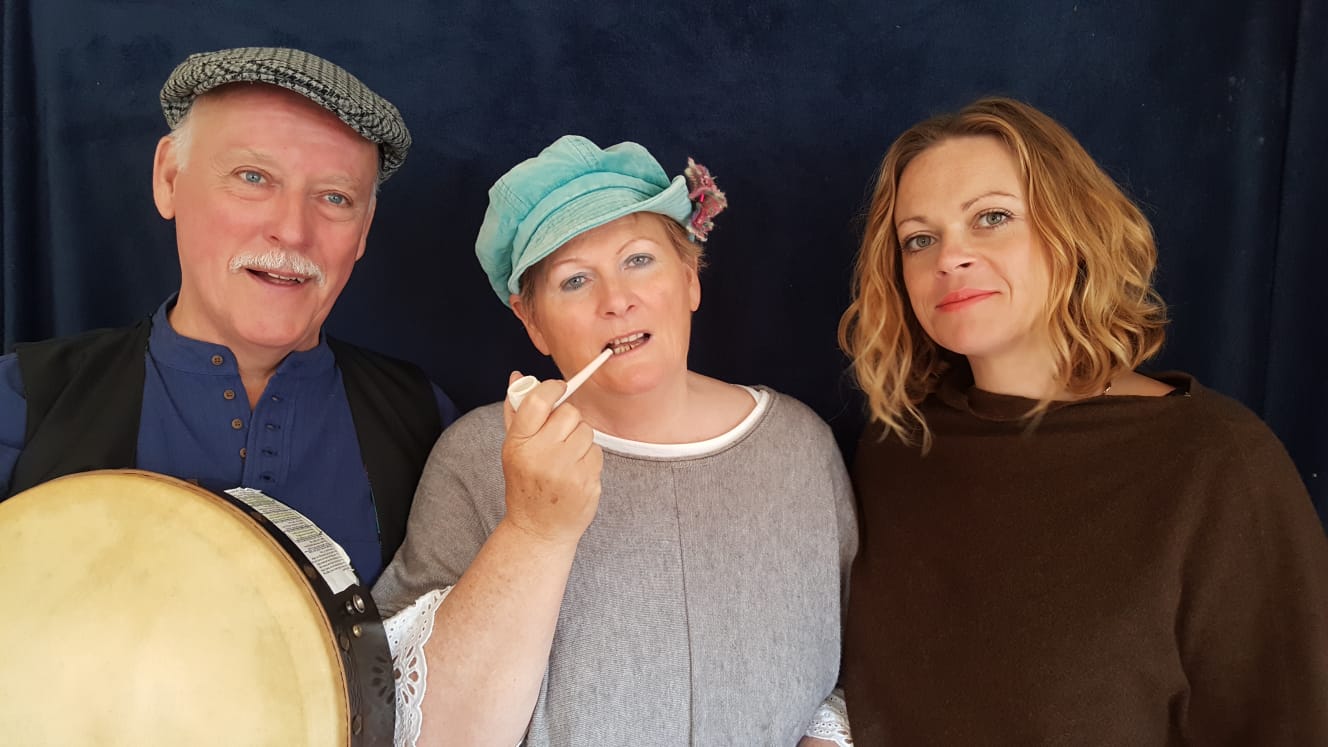 ‘To Shorten the Road’, is an old Irish proverb meaning the journey is shorter when you have someone to tell stories to.

Storytelling is the oldest form of entertainment and in Ireland, in the old days, people would gather in the house of the best Storyteller, or the best Seanchai, in between the stories there would be songs, music, poetry, and dance.

In ‘To Shorten the Road’ Lorraine O’Brien plays the part of Peig Meg Seanchai whose enchanting and humourous stories will bring a smile to your face, a warmth to your heart, and tears of laughter to your eyes. Emma O’Brien will also spin a yarn or two, and entertain you with her wonderful singing voice. Mick Heffernan completes the trio.

Lorraine was the founder of Dry Rain Youth Theatre and Performing Arts Centre, a community arts venture which ran for ten years in An Lar, Dargle Road, Bray. She won the Bray Chamber of Commerce award for artistic contribution to Bray, and the Bray One Act festival awarded her for outstanding contribution to drama.

She has written a number of plays. Dark Places won best play and played to packed houses in Dry Rain Theatre, Mermaid, Andrews Lane and as far away as North Carolina in the USA. Another play A Different Rhyme was produced by the Abbey Theatre and played in the Peacock, and was also adapted for radio. Another high profile achievement was On the Game, performed by the female inmates in Mountjoy jail, and also played in the Mermaid.

Lorraine directs regularly for the Raging Hormones a community women’s drama group based in Loughlinstown, this group under her direction have won no less than five community awards.

After ten years in Dry Rain she took up the position of Creative Arts Officer with Dun Laoghaire Youth Service. Her first venture there was to adapted Christina Nobles book Bridge Across My Sorrow for stage in which one hundred and twenty community members performed in the Pavilion, Dun Laoghaire.

Lorraine has a degree in Theatre in Education from Trinity College and is now focusing her attention on the revival of our oral tradition of storytelling.

PrevPreviousWicklow to Greystones Greenway, have your say (Druids Glen Hotel)
NextComedian Des Bishop to perform in Arklow this SundayNext

‘A Time for Christmas’ E.P. Launch at The Whale Theatre