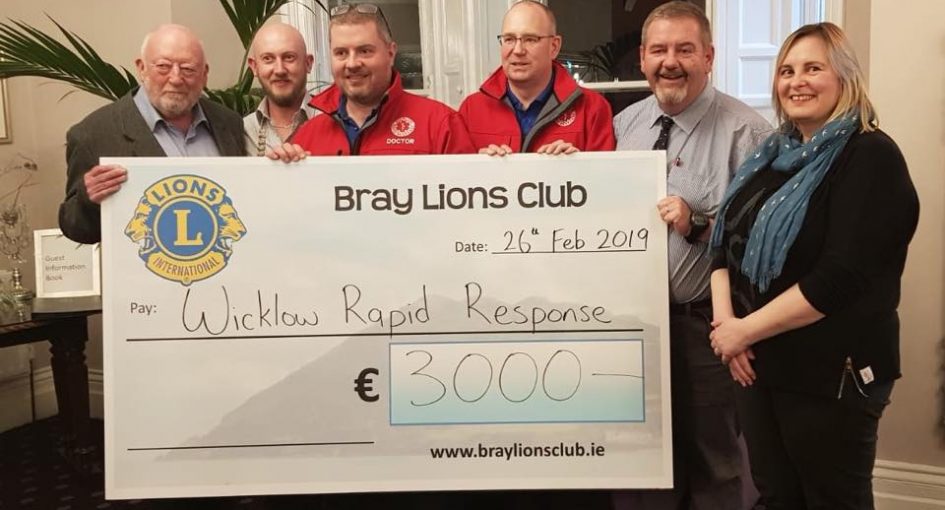 The money was raised for Wicklow Rapid Response (WWRR) as part of the Bray Charities Sea Swim which took place on New Years Day.

“These much needed funds will go towards our goal of a new ventilator,” say WWRR, who praised Bray Lions Club for its efforts in organising the charity event.

The service, which assists in medical emergencies, is seeking to purchase a life support machine which can sustain the breathing of unconscious patients. The new machine is expected to cost €15,000-25,000 and more fundraising initiatives are planned for the coming year.

A further €9,000 was awarded to three other charities as part of the New Years Day Sea Swim event. They include Bray Area Rough Sleepers, Bray Women’s Refuge, and Bray Lions Senior Citizens and Carers.

Congratulations To all who took part in the New Year's Day Bray Charities Sea Swim on the Seafront Bray today. The…

It has been a busy year for WWRR with the volunteer service seeing an average of three call-outs per week in 2018.

“The WWRR Doctor has been tasked [with] three critical calls in the last 5 days, for example, where the patients required advanced medical interventions,” a spokesperson for WWRR told WicklowNews.net.

Wicklow is just one of four such services in Ireland, each of whom cooperates with the National Ambulance Service Emergency Operations Centre.

Because the services are based in the local community, they can sometimes reach the scene before the regular ambulance service has time to arrive. In certain cases WWRR’s volunteer doctor can treat major trauma and cardiac patients well before they arrive at hospital.

One of the response unit’s key assets is its Skoda Karoq 4WD, which has been sponsored by Sinnott Autos in Wicklow Town for the past four years.

Members of the public with ideas for fundraising or who wish to donate directly can get in touch with Wicklow Rapid Response at info@wwrr.ie.