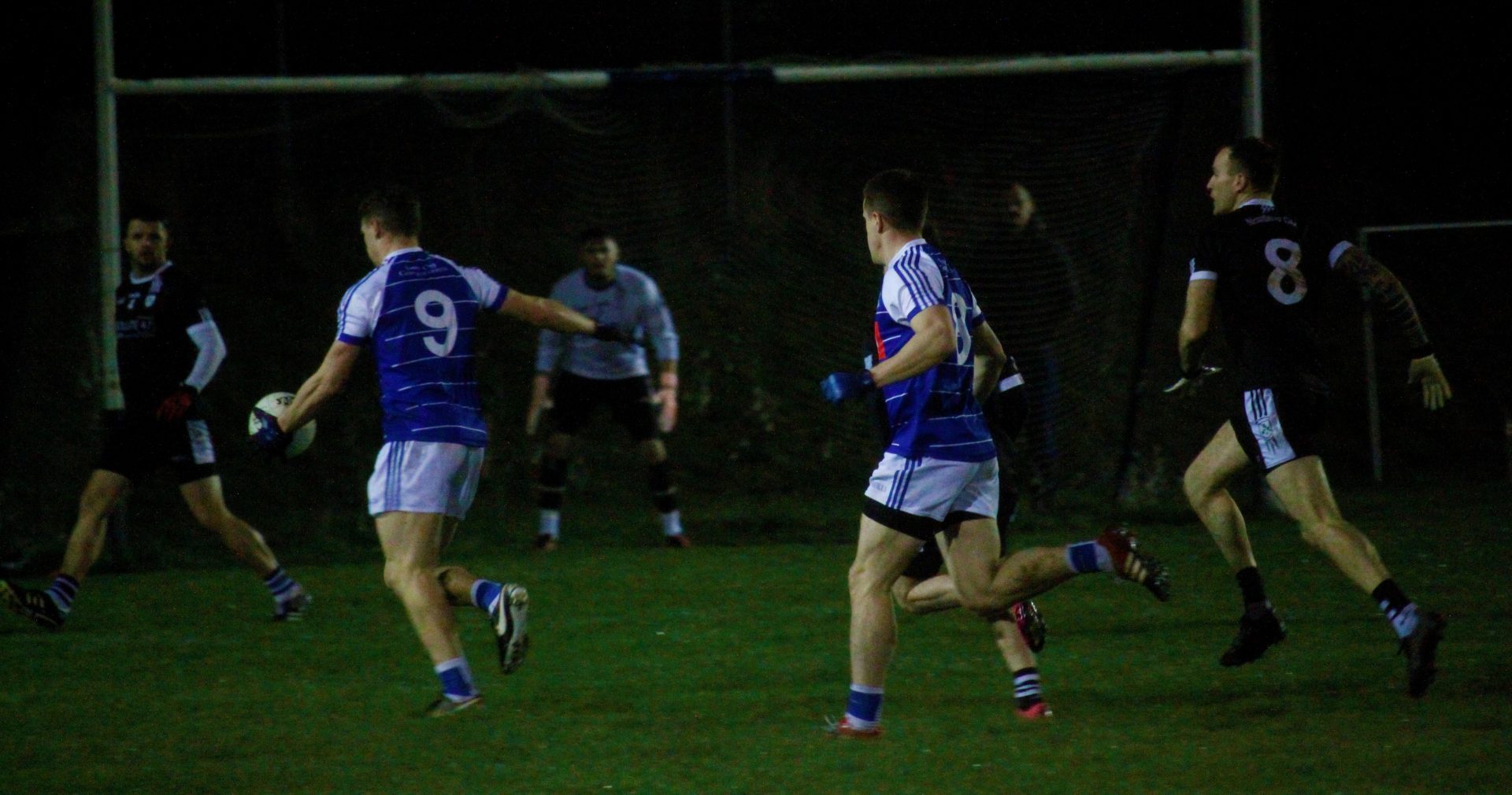 A late-late Danny Woods goal proved to be the difference as Éire Óg kicked off their Division 1A league campaign with a win over Newtown following a topsy turvy affair in Greystones.

The 2019 league season started on Thursday night with Newtown making the trip to Greystones for what would unfold as a truly back-and-forth affair with Éire Óg.

The visitors had the better of the first-half, with the enigmatic Ross Davis splitting the posts five times, before setting up Paul O’Riordan for a goal as the visitors went into the break with a 1-09 to 1-04 lead.

However, Éire Óg produced a stirring second-half display to claw their way back into the game, with Woods sealing the victory with a goal three minutes from the end.

On a cold and rain-drenched evening in Greystones, it was Newtown that came storming out of the blocks in a game that would go on to epitomise the old ‘tale of two halves’ adage.

Conor Odlum kicked-off proceedings with a free inside the first 60 seconds, before Ross Davis — who spent the first-half running the Éire Óg rearguard ragged with his movement and pace behind the lines — doubled Newtown’s lead from another free.

Shortly after Adam Heffernan put Newtown three points into the lead, Éire Óg managed to draw themselves level with the first goal of the game after James Cranley collected the ball from Darragh Shields to convert in the fifth-minute.

However, Newtown’s intensity and tempo had rattled the hosts, who found themselves two points behind by the time the clock had ticked over into the 12th-minute. Both scores came from the boot of Ross Davis, with the first coming after the tricky corner-forward had cut in on his right foot to lift the ball over, and the second coming from a free which he had won himself.

Éire Óg rebounded towards the tail-end of the half — even taking a 1-03 to 0-05 lead at one point through Shields — but it was Newtown that finished the stronger, finally getting the goal their performance had warranted, with seven minutes left until the break.

Driving towards the Greystones club’s area, Paul O’Riordan passed the ball onto Davis, who fed it back into the path of O’Riordan to dispatch the ball clinically into the goalkeeper’s left-hand corner.

Two further scores came from the boot of Davis, as Newtown went into half-time in command at 1-09 to 1-04.

Whatever was said to the Éire Óg troops at the interval seemed to give them a new lease on life at the start of the second-half, as the hosts came charging out with vigour, energy, and tempo.

Much like Newtown had done at the start of the opening period, Éire Óg got their first score of the second-half before 60 seconds had lapsed.

It came from the boot of Darren Hayden, who had dropped deeper on the field in order to grab a foothold on proceedings.

Newtown were stunned, but found themselves with a rare goal chance through, unsurprisingly, Ross Davis. Gathering the ball wide on the right, Davis made a typically incisive run towards goal, escaping the clutches of three Éire Óg defenders as he did so. However, when the time came to pull the trigger, Davis could only screw his shot wide.

Newtown continued to feed Davis so as to regain their dominance over the game, but to no avail, as the Éire Óg defence choked the corner-forward of any meaningful openings. Stephen Kelly and Darragh Shields, in particular, starved the Newtown forwards in the second-half.

As the game transitioned into its final 10 minutes, Éire Óg went in for the kill. James Cranley commenced their ultimate surge with a tremendous point from wide on the right-hand side. That was followed by another Darren Hayden point to draw the sides level for the first time since the 20th-minute.

Ross Davis put the ball over the bar from a free with four minutes left on the clock, but there was no stopping Éire Óg’s momentum. Finally, with just three minutes on the clock, up stepped midfielder Danny Woods to score the game’s most important score.

Not for the first time in the second-half, Darren Hayden collected the ball in the centre of the park and drove towards the Newtown goal-mouth.

Rather than chance a pop himself, Hayden showed the awareness to work the ball onto Woods, who made no mistake in blasting the ball past the helpless Ken Turner. Éire Óg had their tails up, while Newtown were left shocked and deflated by their own wasteful second-half showing.

Darragh Shields got one more point for the hosts as they saw out a stirring comeback performance to claim the win and two points.