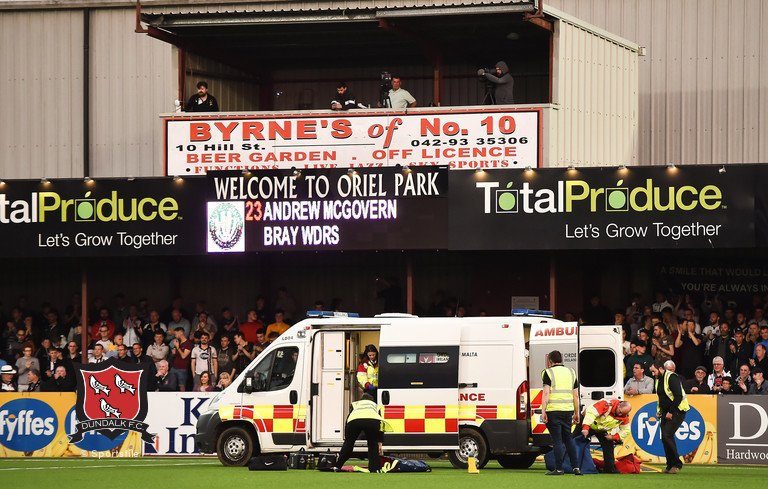 On the 25th of May 2018, Andrew McGovern came off the bench at Oriel Park in Dundalk to make just his sixth-appearance for Bray Wanderers, having signed for the struggling Seagulls three months prior in February. Brought on for Gary McCabe with just 26 minutes on the clock, and with his side already trailing 2-0 to the eventual champions, there was very little the still inexperienced 19-year-old could do to save the sinking ship.

Unfortunately, just under an hour after coming onto the pitch, McGovern’s match, and season, would come to a premature end when he suffered a comminuted fracture of his fibula, and a ruptured deltoid ligament in his ankle following a collision with team-mate Seán Heaney, requiring seven minutes worth of treatment on the pitch before he was finally escorted out of the stadium in an ambulance.

“To be honest, it was a bit of a blur,” he told WicklowNews. “It happened in about the 85th minute, but it is a bit of a blur in my head. I suppose it was my mind’s way of dealing with it.”

Remarkably, he revealed that, in the immediate aftermath of the incident, it was a separate oral-related injury that he was most concerned with.

“When it happened, I chipped my tooth as well as breaking the leg,” he said. “At the time, I knew the leg could be fixed, I was more concerned with the tooth. The people in the ambulance told me afterwards that I kept asking about my tooth, rather than about my leg.”

Following an initially-delayed surgery to repair the extensive damge that had been suffered, the 20-year-old faced just under three months in a cast and boot, awaiting a time when he could take to the field. Despite the setback, McGovern has said that it was a positive mindset that allowed him to come through the other side of it all.

“It is really important to have an end goal in mind. It is easy to get caught up in the whole situation. Your friends and family, and who you have around you are very important. They help you to keep focused and to keep doing your rehab, day-in-day-out. Some of it is very boring and repetitive, but you have to keep at it and hope that, eventually, it will work out for you.

“To get through something like that, there is no other way than to stay positive.”

McGovern’s injury was one of numerous issues that Bray Wanderers faced in 2018. A year that was plagued by financial uncertainties, strike action by the players, sanctions, and the eventual take-over of the club by Niall O’Driscoll was eventually bookended by the club’s inevitable relegation from the Airtricity League Premier Division.

Despite the turbulent nature of the club’s very existence across the summer of 2018, McGovern admitted that his teammates made it easier for him to endure his time on the sidelines.

“A few of the lads were very good; popping around to the house, having games of FIFA, and bringing me out to the matches to watch. It was great just to get out of the house and see a few of the new faces around the place. It would lift your spirits a bit,” he said.

While McGovern maintained his optimistic mentality throughout his gruelling rehabilitation, football can often times be ruthless, especially when it concerns squad turnover at a club with the unpredictable history that Bray Wanderers has endured in recent years.

However, with Niall O’Driscoll at the helm, and pushing the club in more of a community-orientated image than before he gained control, the choice was made to welcome McGovern back into the fold, with the 20-year-old expressing his delight, and surprise, at the news.

“I was delighted to be kept on. It was a bit unexpected to be honest. I had been working with the physio towards the latter end of the season really intensively, and then, in the off-season, I was working with Ferdia Fallon, and we would do pitch sessions together to bring the leg up a bit.

“I put a lot of work in but I was more focused on getting the leg right first, and then seeing where that took me, rather than putting a lot of pressure on myself to get back playing that standard of football. I felt as though I had unfinished business from last year so I was delighted to be signed back.”

McGovern finally made his return to football on the 2nd of February —  253 days after suffering the broken leg and ligament damage — when he was brought on with four minutes left on the clock in a 2-1 friendly victory away in Waterford, marking the second pre-season win out of four for Gary Cronin’s new look side.

Now that he has been part of the new on-field era at the Carlisle Grounds, McGovern has insisted that, as long as the level of workrate persists, Bray can achieve anything in the First Division and beyond.

“We have a great group of lads and we’ve had a good pre-season. We are in the supreme altitude gym in Bray which I really thinks helped us a lot. It has been going very well.

“Hopefully, we’ll keep working hard and take that into the season. You never know where that will take us.”

Bray Wanderers kick-off their 2019 Airtricity League First Division campaign on the 22nd of February, when they travel to Cabinteely, before Limerick travel to the Carlisle Grounds the following Friday.