409
SHARES
ShareTweetSubscribe to our Newsletter

MET Eireann have issued a  Status Yellow – Snow-ice warning this morning for the entire country.

The warning issued this morning at 10am comes into effect from 11pm tonight (Saturday, March 9) until 6am on Monday (March 11)

Motorists should avoid the Wicklow Uplands particularly the Sally Gap, and members of the public should keep clear of cliffs and piers near the coast.

Blustery or windy early this morning in Leinster with heavy showers, some wintry in north Leinster. The showers will die out and it will be dry and bright for a time today. This evening, rain will spread northeastwards over the province. Highest temperatures of 7 to 9 degrees with fresh, gusty westerly winds.

Early tonight, rain will turn to sleet and snow in many areas, especially in south Leinster, bringing snow accumulations and hazardous conditions on roads and paths A separate band of rain sleet and snow will move in from the west overnight bringing further accumulations Lowest temperatures of 0 to 2 degrees.

Sunday will be a cold, raw day with widespread wintry showers or rain, hail, sleet or snow with a risk of thunder. Highest temperatures of 4 to 7 degrees with fresh to strong, gusty westerly winds and with gales on coasts. 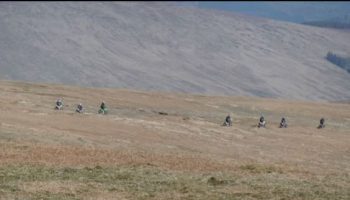