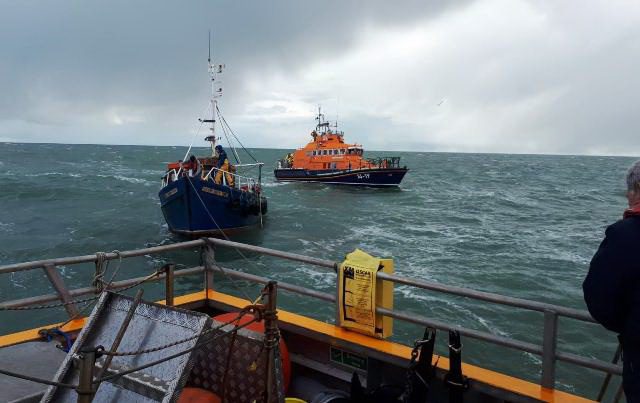 242
SHARES
ShareTweetSubscribe to our Newsletter

Arklow RNLI launched on Tuesday afternoon to assist a vessel in distress following a Launch Request from the Irish Coast Guard &amp; a Pager Alert at 3.20pm.

The volunteer crew left their jobs and normal workday behind and within minutes of the alert were aboard RNLB Ger Tigchlearr and underway.

The lifeboat made its way to the reported position approximately 9 miles South east of Arklow and close to the notorious offshore Arklow sand banks.

The casualty vessel had reported engine failure and that she was adrift and unable to anchor.

As the Lifeboat made its way to the location, another of Arklow RNLI’s Coxswains and crew members ,who were at work aboard a wind turbine transfer and maintenance vessel heard the request for assistance on the VHF radio, the work vessel was closer to the stricken vessel which was by now approximately half a mile from the sandbanks and in real danger of being wrecked on the bank in the prevailing westerly wind and moderate sea conditions.

Following a consultation with the Lifeboat Coxswain, The workboat crew were able to get a line safely aboard the stricken vessel and rendered assistance by towing the casualty vessel away from the sandbanks for a time.

As this was in progress the lifeboat arrived on scene, the lifeboat crew then set up a tow line and were able to tow the casualty vessel with three aboard back home to Arklow

“Thanks to the quick thinking and actions of our volunteers who were at work on the wind turbine vessel, Arklow Lifeboat was in the happy postion to tow this fishing vessel and her crew of 3 persons to safety, had they not been at sea today, this incident may well not have had such a positive outcome.

Further Water Safety Information can be found at www.respecthewater.com