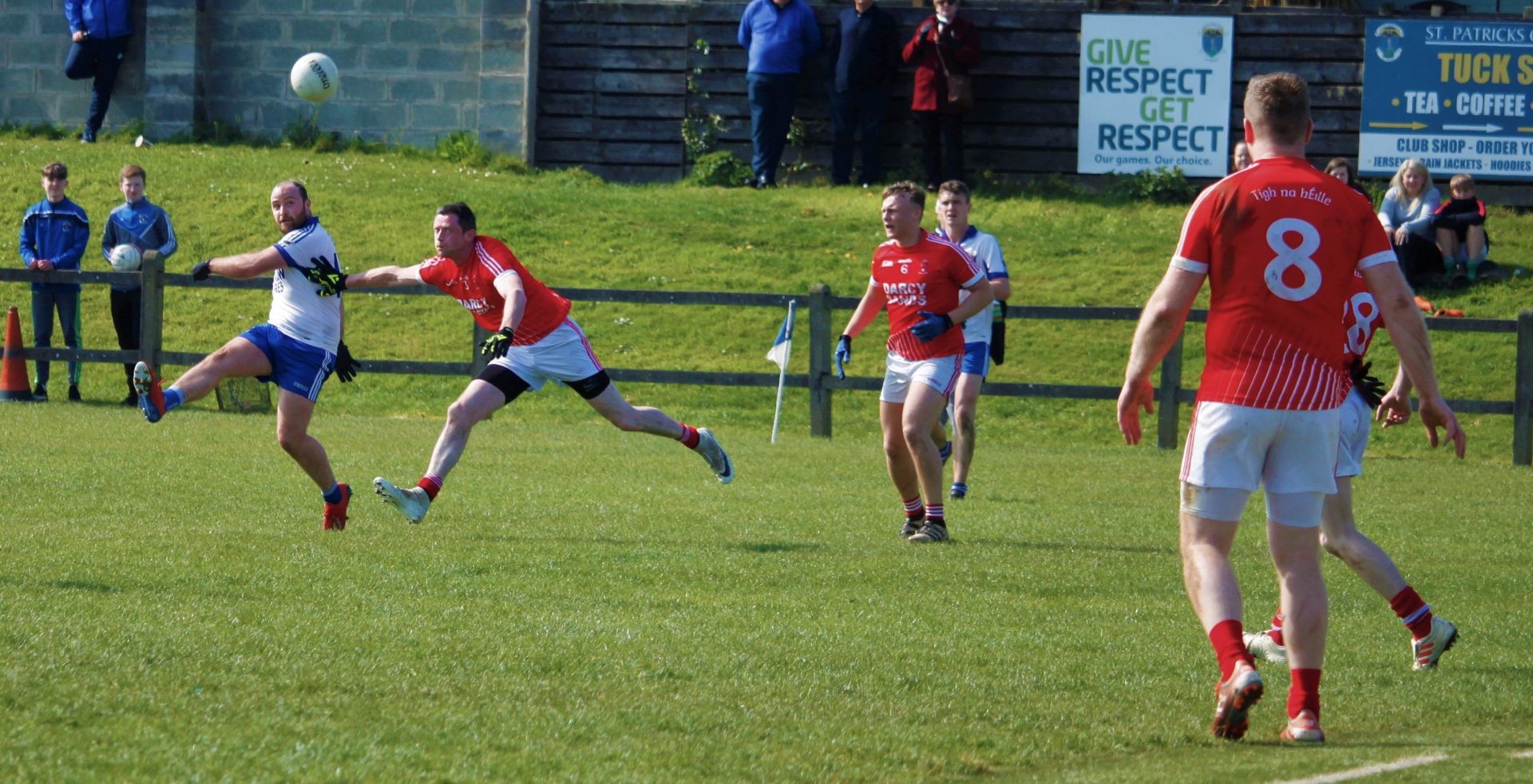 Stephen Duffy was shown a controversial red card for St. Pat’s, as Tinahely came back from a seven-point second-half deficit to leave Dunbur with a draw on Sunday morning.

Tinahely made a lightning-quick start in a game that would have seen them return to the summit of division one of the senior football league with a win.

However, Pat’s rebounded from an early Jason Cush goal to go in at half-time in front, and extended that lead further into the second-half.

The tide turned on the dramatic dismissal of Stephen Duffy with just nine minutes left on the clock, as Tinahely charged back with a Stephen Dillon goal to come away with a potentially priceless point.

St. Pat’s went into Sunday morning’s affair on the back of just one league win in 2019. That disappointing run appeared set to continue when Michael Byrne intercepted a loose ball in the Wicklow side’s half-back line, before working it onto Rory Stokes, who in turn offloaded to Jason Cush to smash past Colm Byrne for the first goal of the day.

Tinahely were shell-shocked, and the reigning-county champions sensed blood in the water. Stephen Duffy pointed off of a long Ciarán Doyle free up-field to put Pat’s in front for the first-time with three minutes of the half remaining, before a swift counter-attack down the right-hand side involving resulted in Dean Healy having a shot brilliantly blocked behind by Stokes.

Tommy Kelly’s subsequent 45′ was fisted over by Jonathan Delahunt, as Pat’s went into the half-time interval with a well-earned 0-09 to 1-02 advantage.

Alan Dillon reduced the arrears to within a single score with a free just over a minute into the second-half, before McGettigan charged through the middle and helped possession onto Donal Fitzgerald, who drove the ball past Niall Byrne in the Tinahely goal.

A McGettigan point on the counter — seconds after the visitors had a goal ruled out for steps — extended the hosts’ lead to seven points with 22 minutes left, setting the stage for Tinahely’s dramatic comeback.

Rory Stokes reduced the gap to six with a 45′, before Michael Byrne once again took advantage of sloppy passing in the Pat’s half to tee up Stokes, who traded a give-and-go with Stephen Dillon to score Tinahely’s second goal of the afternoon with 20 minutes left.

Stephen Duffy cut inside on to split the posts with a right-footed strike to restore the deficit back to four points seven minutes later, before a moment of controversy involving the same man flipped the game on its head.

An innocuous coming together between Duffy and William Dillon came to a head when the Wicklow man appeared to raise his arm to wards the face of the Tinahely midfielder. Dillon went to ground, giving the referee little option than to brandish the straight red-card and reduce Pat’s to 14-men for the final nine minutes.

Tinahely took full-advantage of the situation. A high and hopeful pass into the Pat’s square was fisted down to Stephen Dillon, who didn’t let the opportunity score his side’s third goal of the game to reduce the gap to just a single point.

The comeback was complete with four and a half minutes left to play, when Rory Stokes slotted a tremendous shot over the bar to seal a draw that seemed so unlikely earlier in the second-half.

Sunday’s result means that Tinahely have now edged ahead of Baltinglass at the top of division one of the senior county football league by virtue of their superior points differential.