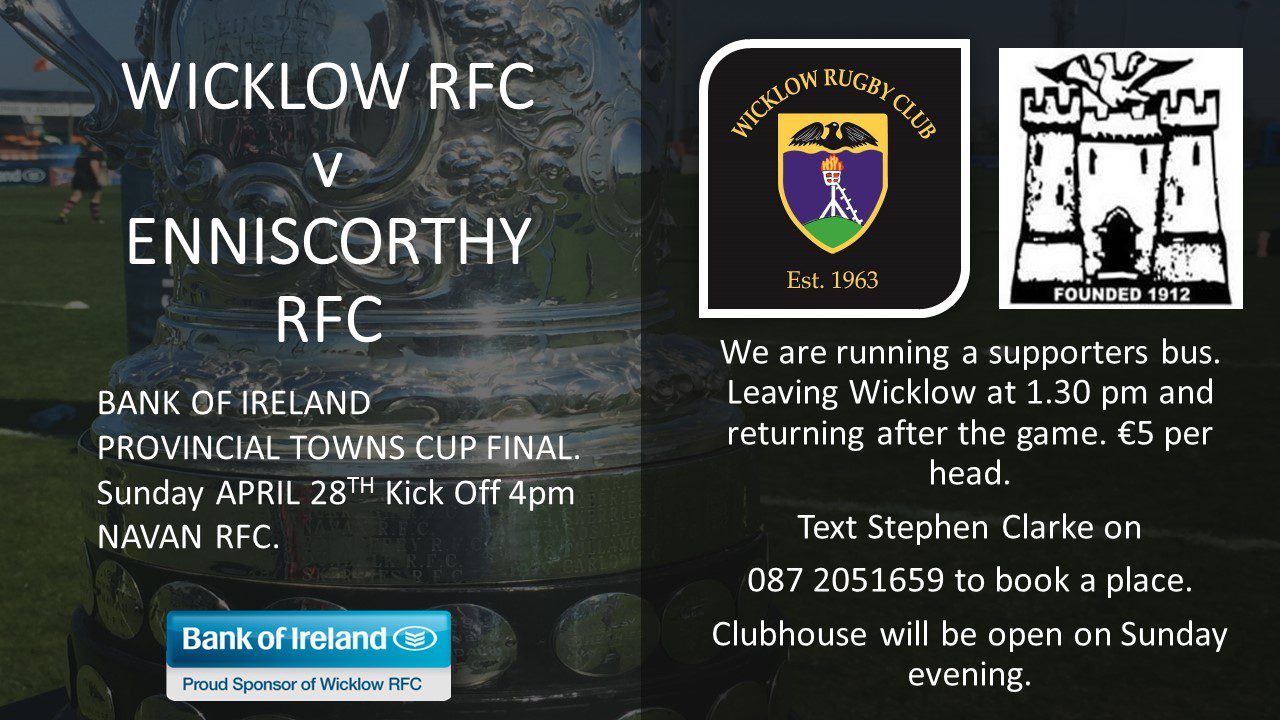 This weekend Wicklow RFC will take part in their third ever Provincial Towns Cup Final. They will play their fierce rivals Enniscorthy in what is a mouth-watering clash between the top two sides in Leinster. The game takes place in Navan RFC at 4pm on Sunday April 28th

The town is awash with red, white, and black. Billy Byrne is back in a Wicklow RFC jersey. Wicklow are asking all of their supporters to make the effort to get to Navan in large numbers next Sunday. The club are running buses for €5 return. The buses leave the club at 1.30pm, returning after the game.

Having received a bye in the first round because they reached the semi final of the All Ireland Junior Cup, Wicklow’s Provincial Towns Cup campaign started with a daunting trip to the Black Gates in Tullow.

In a game that was more comfortable than the score line suggests, Wicklow beat the home side by 24 – 26. In the quarter finals, they beat Dundalk 29 – 10, in front of a large crowd at Ashtown Lane. The semi final saw Wicklow take on 1B runners up Longford RFC in Naas. A large crowd of Wicklow supporters travelled to see Wicklow emerge 16 – 3 winners in a tough battle.

Enniscorthy, who also received a bye in the first round, took on Skerries in round two, beating the North Dublin side by 35 – 6. In the quarter final they beat Tullamore by 41 -19 before easing past Gorey by 20 – 5, in a facile semi final win.

At times, Enniscorthy have looked a class apart this season. They ran away, virtually unchallenged in winning the Leinster League and then sailed through the AIL qualifiers. They travelled to Instonians and comfortably beat the Ulster Champions on their home patch.

They demolished the Munster Champions Clonmel 46 – 5 before travelling to Connemara to finish the job last weekend. The Wexford men will be plying their trade in the AIL next season and are a superb team.

Wicklow are coached by player coaches George Naoupu and Billy Ngawini who hail from New Zealand but this is a team that has been forged on the playing fields of Ashtown Lane. Nine players from last season’s under 18s played senior rugby this year. At least five of these boys are likely to feature in the match day squad.

The Wicklow side really is a clichéd blend of youth and experience, but the spine of the team is littered with experienced players, who know how to win a towns cup. Eanna Killeen, John Jenkinson, Liam Gaffney, Wes Wojnar, Denis Higgins, Niall Earls, Shane Farrar, Mark Higgins, Eddie Downes all played their part on that emotional day three years ago when Wicklow finally lifted the beautiful old trophy after many years of heartbreak.

The return of Wicklow old boys Charlie Butterworth and Jack McKenna from Lansdowne has strengthened the mix, as has an exciting sprinkling of youth from the likes of Adam Cullen, Mark Nicholson, Brian Shortt and Luke Gersekowski and co.

The outstanding form of the Porter brothers whose father and grandfather both played for Wicklow, has been a revelation. Powerful winger, Simon Breen has fought his way back into the squad after a devastating knee injury that could have ended his playing career.

One of the teams several unsung heroes, Neil Dickenson led the party celebrations from the front in Ashbourne in 2016. This weekend he will lead the Wicklow front row into battle, on a day that will mean so much to him.

Wicklow will go to Navan as underdogs, respecting but not fearing Enniscorthy. Niall Earls men beat the Slaneysiders earlier in the season in what was their only loss in the entire campaign. Three years ago Wicklow travelled to Ashbourne for the Towns Cup final as complete underdogs and came away with that famous win.

These two teams have had fantastic battles over the last few years but Wicklow know, in their hearts, on the day, if they get it right, they can beat them. If they harbour hopes of lifting the venerable old trophy, for the second time in the clubs history, this band of brothers will need to be at their very best.