Bray Wanderers cup dream extinguished at the hands of Waterford 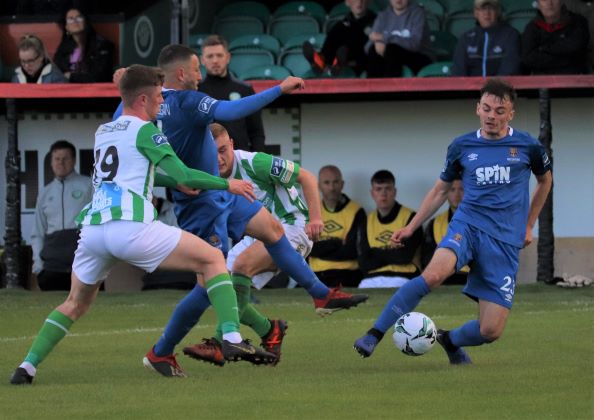 Bray Wanderers have been knocked out of the EA SPORTS Cup, after a Scott Twine free-kick sent Waterford through to the final four.

Having stunned Shamrock Rovers in the previous round, Gary Cronin’s men went in search of another Premier Division scalp at the Carlisle Grounds.

Despite growing into proceedings as the game progressed, Bray were made to suffer for a slow, nervy start, when Scott Twine expertly placed a free-kick into the corner of Gabriel Sava’s net.

Bray would enjoy the better of the second-half, but were unable to turn their chances into goals, as their cup aspirations came to and end at the quarter-final stage.

Since returning to action, following a break for the UEFA Under-17 European Championships earlier this month, Bray have gone on a run of three consecutive wins, placing them in a confident mood for Monday night’s clash.

Between that, and their previous win over Shamrock Rovers, the Seagulls had plenty of momentum to carry into the game against Waterford.

Unfortuntely for Gary Cronin, that recent form did not translate itself onto the pitch, as Bray suffered from a cagey opening 20 minutes, which ultimately culminated in them falling behind.

A foul by Hugh Douglas, who was given a run for his money up against the energetic Ishmahil Akinade, gave Scott Twine the opportunity for a shot at goal from a free-kick. The 19-year-old made no mistake, expertly curling the ball up-and-over the wall, and into the right-hand corner of Sava’s goal.

Once they took the lead, Waterford smelled blood, and went for the kill. Former Bray-man Cory Galvin combined well with the industrious Bastian Hery, ending with Galvin forcing a save from Sava.

Wanderers struggled all half to create any sort of meaningful opening for the equaliser. What chances they did manage to fashion came from Dylan McGlade, who forced an impressive save from the otherwise-untroubled Matthew Connor, as Waterford went into the interval with the slender, but deserved lead.

With 57 minutes on the clock, shortly after Galvin saw another shot sail over the bar, Cronin made the first subtition of the day; bringing on Derek Daly for Dylan Barnett.

The introduction of Daly down the left-hand side seemed to give Bray an extra element of energy and pace going forward, as they began to put more pressure on the Waterford rearguard.

The renewed vigour almost paid off in spectacular fashion. Joe Doyle, who had been isolated for the majority of the affair, showed excellent awareness to play a quick free-kick into the feet of Luke Nolan. Doyle then demonstrated the desire to make a an incisive run, from which Nolan found him with a clever ball around the back.

With the goal at his mercy, Doyle unleashed a strike which cannoned off the Waterford bar. That scare seemed to wake the visitors up, as they Akinade had a shot go wide shortly after Doyle’s chance.

The introductions of Zak Elbouzedi and Aaron Drinan gave Waterford a bit more control over a second-half that threatened to get away from them. The former combined with Shane Griffin, before Griffin then had a shot well-saved by Sava from the edge of the area.

Bray did manage to create one more half-chance when the game entered four-minutes of injury-time.

A route-one free-kick ended with Hugh Douglas flicking the ball in-behind to Joe Doyle, only for the young strike to put his resulting shot harmlessly wide.

Bray don’t have long to recover from their cup exit, as they travel to Cobh Ramblers on Friday night, in search of a fourth win-in-a-row in the league.