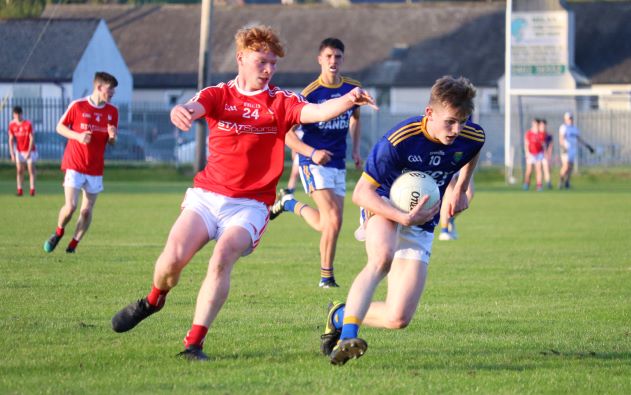 Wicklow will meet Dublin in the Leinster Minor Football Championship quarter-finals following a clinical, 23-point win over Louth in Aughrim, on Wednesday evening.

Eoin Doyle built on a hat-trick against Kilkenny last time out with a first-half brace. Matthew Ging, Joe Prendergast, and Conor Fulham all got in on the act, as Kevin O’Brien’s side cruised through to the provincial knock-out stages.

Before walking out onto the sun-soaked Joule Park turf, Wicklow knew that avoiding defeat would see them qualify for the quarter-finals.

Despite suffering from sloppy possession in the early stages, and falling behind to a Donal Leavy point, Wicklow quickly found their groove. With just five minutes on the clock, Bradley Hickey found Eoin Doyle, who cut onto his left-peg and placed the ball past Niall Brady in the Louth goal.

Matthew Ging almost got the second goal of the day shortly after, only to see his shot well saved. Wicklow would not be denied, however, when the Ging cut through the Louth back-line down the right-hand side, before cutting the ball back to find Eoin Doyle

The Rathnew clubman needed no second invitation; punching in his second of the afternoon, and his fifth of the championship campaign.

At this point, Kevin O’Brien’s men were well in-command of the tie. Luke Matthews got the visitors’ first score since the second minute to reduce the deficit to two goals, but this did nothing to quell Wicklow’s aggression going forward.

With 15 minutes of the first-half still to go, Wicklow got their third goal of the day. Hickey placed a precise cross-field pass over the top of the Louth backs, finding Matthew Ging. He fired the ball into the top-right corner of the Louth goal to extend his team’s lead even further.

Louth staged a late first-half comeback, with Luke Matthews (2),  Ben Collier, and Tom Gray. However, that rally did nothing for Fergus Flynn’s side’s prospects, as they went into the half-time break eight points behind at 3-06 to 0-07.

Wicklow built on their first-half showing to put the game to bed in the second. Eoin Doyle and Matthew Ging traded frees, before a further two frees from Doyle pushed the Garden’s advantage out to 13 points.

That lead continued to build when, 10 minutes into the second-period, Bradley Hickey struck a hopeful ball over the top; a strategy that had been so fruitful all evening.

That speculative pass found Joe Prendergast, who strode in off the left-hand side to go one-on-one with the Louth goalkeeper.

Prendergast kept his cool, rounded the shot-stopper, and rolled the ball into the back of the Louth net to make it 4-16 to 0-09.

The routine win was capped off a minute before the end of proceedings. Two minutes after a Carl Gillespie free had put an outmatches Louth team into double-figures, substitute Conor Fulham — who had been brought on for Shane Daly — advanced down the right flank, before firing a powerful right-footed shot into the far corner of the goal.

Fulham’s goal proved to be the final score of the game, as Wicklow cruised past Louth to set-up a tantalising clash, on June 1st, against Dublin, who Wicklow had beaten in the championship last year.