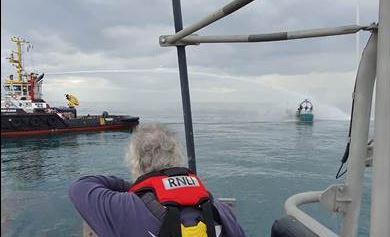 Volunteer lifeboat crew at Arklow and Wicklow RNLI were requested to launch their all-weather lifeboats at 3.46pm following a Mayday relay broadcast. The crew of the boat had used an emergency position-indicating radio beacon (EPIRB) to raise the alarm.

Both lifeboats launched immediately while the Irish Coast Guard helicopter Rescue 117 from Waterford was also tasked and multiple vessels in the area responded.

Weather conditions at the time were good with a Force 2-3 westerly wind.

Once on scene 30 miles east of Arklow, the crew onboard Arklow RNLI’s all-weather lifeboat observed that the three casualties had evacuated on to their life raft and had transferred to a nearby vessel. Having assessed the situation, the lifeboat crew proceeded to transfer two of the casualties to the lifeboat and administer casualty care while a third casualty was airlifted by Rescue 117 and later brought to hospital for further observation.

Wicklow and Arklow RNLI then stood by as a tug boat with firefighting capabilities made efforts to put the fire out but the vessel later sank.

Arklow RNLI transferred the two casualties back to the station where they were made comfortable.

Speaking following the rescue, Arklow RNLI Coxswain Ned Dillon said: ‘Thankfully, all three fishermen were rescued this evening and we would like to wish them all a speedy recovery following what must have been a frightening experience for them. We would like to commend the skipper and his crew for doing the right thing and activating the Epirb when they knew they were in difficulty, that was the right thing to do. We would also like to thank and commend the crew of the vessels that were in the area and responded along with ourselves and our colleagues at Wicklow RNLI and in the Irish Coast Guard. It is always sad to see a fishing vessel sink but we are happy that all three fishermen are safe and recovering from their ordeal this evening.’ 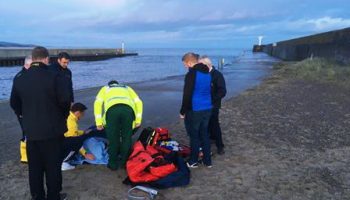 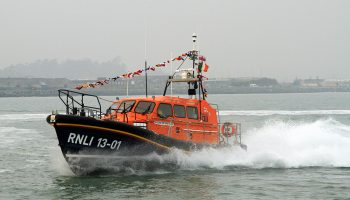